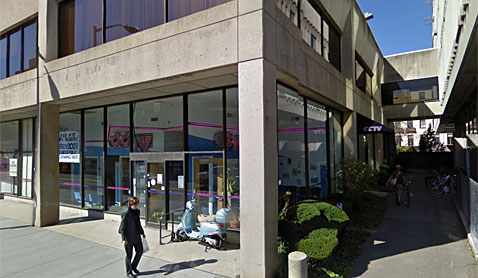 The Prospect Lounge nightclub is planned for the Central Square space once occupied by Cambridge Community Television. (Photo: Google)

The way for the All Asia nightclub to move across Central Square, where the owners expect to rename it the Prospect Lounge, was cleared Monday by the City Council.

The council voted to allow a “Central Square Overlay District” that lets owners Marc Shulman and Patty Chen open a nightclub with a door on Prospect Street; for two decades local zoning has said bars with entertainment must have main entrances on Massachusetts Avenue or Main Street.

At least one city councillor seemed apologetic at a Dec. 10 council meeting about the inconsistent policy, noting some other nightclubs in Central Square with side-street entrances, including T.T. the Bear’s Place on Brookline Street and the same street’s defunct Manray.

“We’ve yet to come up with a rational policy,” said Ken Reeves to his fellow city councillors.

The All Asia’s move from 344 Massachusetts Ave. to Prospect Street, making way for a planned giant biotech building, was announced in December 2010 but struggled to get financing and other paperwork in place. By the time Shulman was able to announce the move officially in August 2011, Reeves had already been talking for months about changing the rule about entrances.

“Please, if we are able to address this petition,” Reeves urged his fellow councillors on Dec. 10. “We have not explained why there are not nightclubs on Mass. Ave. in several locations.” When the issue was taken up Monday, Shulman reminded the council the issue had stalled progress on Prospect Lounge for 17 months.

In that time, the  overlay district won favorable recommendation from the council’s Ordinance Committee on Nov. 14 and Planning Board approval Nov. 20.