Buckaroo’s Mercantile, a staple of quirky Central Square, is in its final days 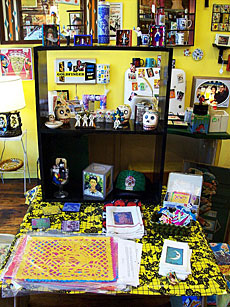 Buckaroo’s Mercantile, a staple of quirky Central Square, is in its final days

Along with constantly renewed timeless wares, Buckaroo’s Mercantile stocks holiday products such as this display for Day of the Dead celebrations.

The eccentric “modern variety store” in Central Square is closing so owner Brooks Morris can move back west, shutting the doors for the last time at the end of the month.

“It’s been in the works for more than a year but the time is finally here,” Morris told his Facebook followers on Jan. 10. “The old family adobe in New Mexico is a glorious place but is in dire need of some TLC, so I am shifting my focus to my online business … and to reacquainting myself with the Southwest.”

Morris moved to New England 21 years ago and opened his store – “the land of everything you want and nothing you need,” from vintage men’s magazines and black velvet paintings to kitschy cocktail items and seasonal stuff such as Hanukkah candy canes and a full range of Day of the Dead stuff – and had storefronts at 858 Massachusetts Ave. and 1297 Cambridge St. in Inman Square before moving to 5 Brookline St. in April 2005. (Central is “my favorite neighborhood,” Morris told Cambridge Community TV’s Lori Jobe.) When things got slow in one sales area, trends came along to revive another, such as when the lounge trend hit in the 2000s and boosted sales of tiki-themed products. Now, Morris said, his online business is thriving.

The going-out-of-business sale started with a Facebook friends-only segment (a third off for people saying the typically eccentric phrase “Free Francine Fishpaw”), had a three-day pause and began again with the general public.