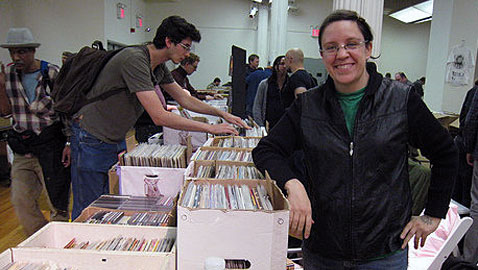 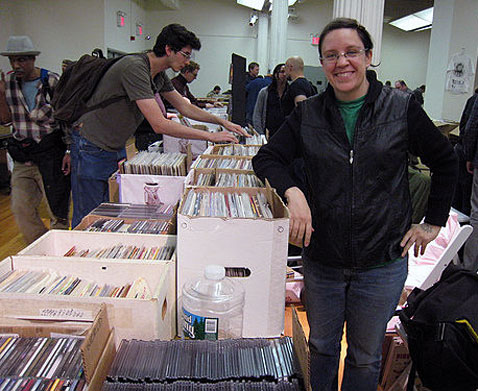 Angela Sawyer will share stories Wednesday from her time behind the counter at Central Square’s Weirdo Records.

“This edition of our show will include Central Square vendors telling stories of the absolute debauchery that is this awful, terrible human cesspool,” Douglass said. I”t’s a group of people who, by now, should have noticed the plague Central Square is on their life and left. But, because of some ethereal force, stayed and now have fantastic stories to tell us all.”

As a longtime employee of the square’s Rodney’s Bookstore – the show began in March 2011 with the name Upstairs@Rodney’s when it was, in fact, upstairs at Rodney’s – Douglass knows what he’s talking about. The comedian is usually found exposed behind plate glass to gawkers on Massachusetts Avenue while making posters in the store’s front window. And Douglass will be sharing Central Square stories in addition to his usual hosting duties.

Other storytellers Wednesday include Angela Sawyer from Weirdo Records, Rob Thomas from Cheapo Records and Tim Manns from Boomerangs. (And, apparently off topic, Sarah Heggan, a New York comic.)

To drive the point home, the Wednesday show is based in Central, again at Middlesex Lounge. It is called “Does This Come in Mauve?”

Douglass is selling the show with his usual flair for showmanship.

“Like always, this show will further skew the line between ‘Hey, that’s funny!’ and ‘Why are we going to this dark, sad, sullen place inside the human condition?’” he said.

Douglass, of the Union Square Round Table, has moved his monthly underground comedy show from the bookstore to an Elks lodge, a rented-out therapist’s office, “a dive-y blues basement and now a bar that reminds us all of the ‘Drive’ soundtrack,” and sums up the promise of the experience as “Admission is free. Drinks are relatively expensive. The show runs around an hour and a half.”