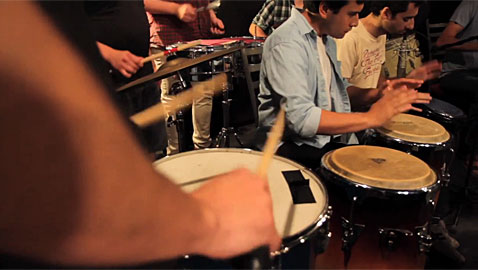 You’d be forgiven for not knowing Caveman. The band’s come to town twice in three years – sharing a bill with the late Ketman at Allston’s Great Scott in 2010 and playing Brighton Music Hall in 2011 – and have only one released album: the great “CoCo Beware,” 10 tracks of blissful melodies with an even sweeter undercurrent of percussive dread.

But Caveman arrives at The Sinclair on Wednesday with an album’s worth of new material, specifically a second, self-titled album that doesn’t drop until April 2.

In fact, Cambridge is only the second stop on the band’s tour and among the first cities to hear the new songs. With the band booked through April 11 and nothing scheduled beyond that, now is the time to see the band live and find out why they’ve been “buzzed about like mad” at music festivals (the Phoenix), “acclaimed” and chased after by “the entire music industry” (The New York Times) and why their “exquisitely harmonic” music (Vulture) causes listeners to “talk about being transported” (Filter).

Drummer Stefan Marolachakis, one of three native New Yorkers and longtime friends in the  Brooklyn quintet, called recently to talk, and from that interview we’ve culled four things to know about Caveman before they take the stage at Harvard Square’s newest, biggest music venue. (His answers over the course of the interview have been condensed and combined.)

Caveman makes great use of the custom guitars of member Jimmy “Cobra” Carbonetti and has its share of synthesizer. But the phrase “drum circle” sticks to Caveman like “flute” sticks to Jethro Tull. Fair? “I think that is true, actually. The main element of it is just we’re really inviting a lot of people to get together and play drums together. It’s been a process for both records where we will have a little drum circle vibe going on to arrange percussion tracks, and I’m a drummer, the singer is a drummer, Nick [Stumpf] who helps produce the records is a drummer, our friends are drummers, and it always ends up being some odd mix of these people filling in some percussive elements. Matt [Iwanusa] and I both play drums simultaneously at the shows, and at some of the shows we have friends come up and play additional drums. We did a section of a breakdown on our first album where we got like a dozen of our friends to play drums with us. In all likelihood in Cambridge, it’s probably going to be just the five of us guys, but we do try to do that whenever we can. So yeah, I guess it’s valid.”

Virtually every track on the second album talks about the time we take to love or help other people and whether it’s a waste. Should we be listening for a theme? “Going into this Matt and I were talking about how this album runs the gamut emotionally. As people, our senses of humor are a big part of our lives, but I don’t know how much that radiates into our actual songs, and I will say that during the process of making the record, most if not all the guys in the band were going through a lot of really interesting life changes. But a lot of my favorite art across different forms – writing or visual art or music or film – gives me enough room for me to fill in the blanks and invest whatever meaning I would into it. For me, that’s often been my favorite way of engaging with art, and this may fall into that realm. Mystery is so rare in the world now that I don’t mind leaving a little more of it. And I think my bandmates would agree.”

Speaking of mystery, the tracks “Vampirer” and “Old Friend” were combined into a deliciously creepy video for “CoCo Beware” that features the voice of actor Peter Sarsgaard, of “Garden State” and “An Education.” How the hell? “The director of the video, Phil Di Fiore, put the word in to Sarsgaard about the band, and he took to it. I was thrilled. I really think he’s a tremendous actor, and for him to be involved with anything we’re doing in any fashion is fantastic.” (Sarsgaard and wife Maggie Gyllenhaal moved to Park Slope from Manhattan in 2009.)

This isn’t a question, but we may know where Caveman is having dinner Wednesday. “I’m really excited to be at The Sinclair, and I love Harvard Square. I’m a big fan. I spent a lot of time there in my younger days. And I’m excited to eat pizza at Pinocchio’s again.”

Doors for the show are at 7 p.m., and the show starts at 8 p.m. with openers Computer Magic and The Novel Ideas. Tickets are $13. The Sinclair is at 52 Church St., Harvard Square.