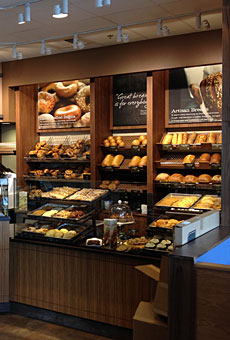 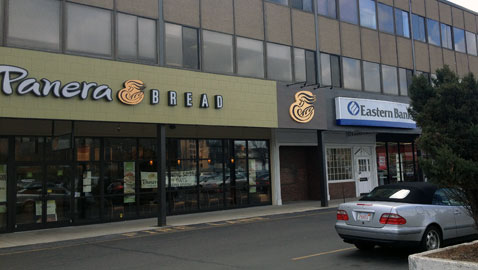 The 4,000-square-foot location will have a complete bakery section.

Cambridge gets its third Panera Bread at 6 a.m. Friday with the opening of an Alewife location – the latest upscale fast-food chain to stake a claim for Cantabrigians no matter where they go.

Chipotle, with six locations in Cambridge and Davis Square, Somerville, is far ahead, though, and Jackie Halfond, Panera’s local marketing manager, said this looks to be the last Panera Bread the area gets for the foreseeable future. Fresh Pond’s gain is also Arlington’s loss; last month the company closed a site in Arlington Heights that had been open since 1999, according to YourArlington.com, offering jobs to the town’s workers and bringing over its manager.

The Panera Bread at 174 Alewife Brook Parkway gets a 10:30 a.m. Friday opening “Bread Cutting Ceremony” at which the first 100 customers get a travel mug as well as a peek at the 4,000-square-foot, 32-table bakery-cafe – the Fresh Pond Mall’s former AT&T store.

It’s the community benefits Panera seems most proud of at the site, including its employment of up to 65 staff, bakers and managers and participation in Operation Dough-Nation, named in 1992 to show Panera’s commitment to community involvement. In this program, the store donates all unsold bread and baked goods to local area hunger relief agencies, said Jessica Dionne, of Fleishman-Hillard public relations. In a separate program called Community Breadbox, all cash donations made by customers at the site are matched by the company and distributed to Feeding America, a charity that gets a four-star rating from Charity Navigator.

In addition, along with the site’s fireplace and free Wi-Fi, there’s a 995-square-foot meeting room and community table – noted directly by Robert MacEachern, a regional vice president for the company, in describing the site’s “warm and welcoming environment.”

“We look forward to providing the many business professionals, families and students fresh and wholesome food choices paired with the convenient service their busy schedules demand,” MacEachern said in a press release.