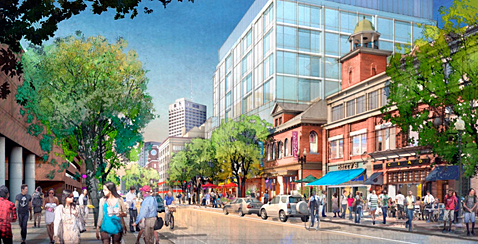 The amount of proposed “innovation space” for startup firms has doubled, affordable housing has risen to a proposed 18 percent of units from 15 percent, a decaying parking lot will finally be turned over to someone who will use it and a community benefits payment will rise to $14 million from $10 million, Massachusetts Institute of Technology officials said Tuesday at a hearing about their plan to redevelop 26 acres in Kendall Square.

City councillors at the Ordinance Committee hearing seemed pleased by the several changes described by Steve Marsh, managing director of real estate with the MIT Investment Management Co., as being added to the zoning petition itself and  a letter of commitment describing the plan’s benefits to the community.

“It continues to be a work in progress,” councillor Marjorie Decker said, expressing appreciation that the changes were being proposed six days before a vote, which is itself a week before the petition expires. “I said I didn’t want [changes] to come back to me the night of the vote.”

Like incentives offered by other developers, the institute’s changes have been introduced meeting by meeting as officials hear demands and suggestions from councillors and residents. The Forest City zoning passed in February for land near Central Square saw an offer to preserve affordable housing come up so abruptly last summer that councillors first added a meeting to their summer schedule to deal with it, then let the petition expire; when the petition returned, the developer tweaked its proposal substantially at a meeting a month before a vote and then, as Decker hinted, the night it took place. The zoning was accepted despite two councillors warning of a “loophole,” and councillor David Maher actually asked Forest City for clarification about their intentions after the plan was adopted.

Up to $500,000 for a community path, including bicycle and pedestrian facilities, by the Grand Junction railroad and trail (and a study of how the institute can offer the city and residents easements to more adjacent land).

The vacant lot at 35 Cherry St., as demanded by councillor Denise Simmons in a complaint about its long-term blighting of the Area IV neighborhood, to be used “in perpetuity” for uses that benefit residents. Some terms and conditions have yet to be set. Simmons wanted the lot to be turned over by the institute earlier than Marsh envisioned, arguing, “MIT left it to be an eyesore in the community, so I don’t think we should have to do anything.”

The use of union labor during construction; contributions of up to $20,000 annually for 10 years to an apprentice Pathways Program for Cambridge residents – yet to be created – equalling funding for at least 15 new apprentice opportunities a year.; and an agreement that tenants in its commercial space have to tell the city’s Office of Workforce Development of all job opportunities as they become available. The plan is expected to create 1,300 construction jobs and 2,500 permanent jobs.

Up to half new retail space being set aside for small retailers, with the cutoff point being ownership and management of five locations elsewhere in the state. Simmons wasn’t satisfied, and asked also that the cost of retail space be limited. “If it’s priced so high no one can attain it, it just doesn’t happen,” she said.

An Open Space and Retail Advisory Committee, meeting once annually for 10 years, that will include representatives from neighborhood groups.

A five-year incremental removal of any property from tax rolls, rather than a three-year process. Last month City Manager Robert W. Healy testified that the 26-acre plan would give the city an additional $10.5 million a year in property taxes from the institute. At $36.5 million annually, the institute is already the city’s biggest taxpayer, but the commercial property could be switched to academic use, causing the city to lose those millions. Under the new proposal, that would happen more slowly. (Owners of nontaxable property, such as schools and churches, often give payments in lieu of taxes.)

“Innovation space” for startups that equals 10 percent of all new office space, although not all of it has to be within the newly zoned land; some would be within 1.25 miles of it. Councillors Leland Cheung and Minka vanBeuzekom had pushed to get innovation space over the 5 percent mark, with vanBeuzekom urging that as much as 33 percent be turned over to cultivating the kind of business that made the square as vital as it is today. “Ten percent is better than 5 percent,” she said. “I’m very surprised and pleased by all the listening that’s been done.”

“Innovation housing” or “micro-housing” in at least 8 percent of the new gross floor area of the required housing will be apartments measuring between 300 and 550 square feet in size. While the space can be leased by anyone, including interested retirees, proponents say it’s ideal for young entrepreneurs and students who will spend much of their time in the lab or office – potentially going along with the innovation space that can serve as an incubator for small businesses. “I really love the incubator housing,” Cheung said, “But it’s not just the size that matters, but the cost of the units.” (Pricing isn’t set, Marsh said, but will be “very attractive and competitive.” He also expected leases of a year, as with traditional apartment rentals.)

Fewer parking permits. While most housing built in the city calls for one parking space per unit, the institute will demand that renters of 30 out of the 300 units it is estimated to build – with the burden falling on micro-units – won’t apply for a resident parking permit.

Marsh said the institute was also committed to the additional affordable-housing requirement; following noise limits for office zoning; and complying with the sign ordinance followed everywhere in the city except Kendall Square.