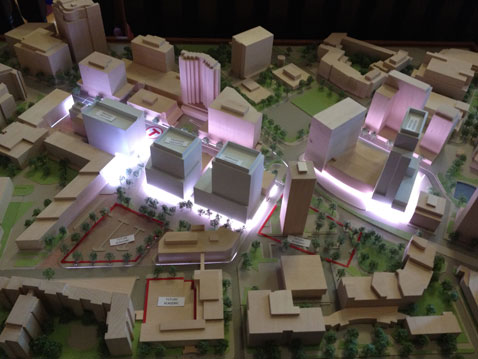 A light-up model of Kendall Square shows buildings proposed by the Massachusetts Institute of Technology in a zoning request. (Photo: Marc Levy)

At least three city councillors cast doubt Friday that they could vote for a Kendall Square rezoning petition April 8.

Ken Reeves said the entire plan sketched out by the Massachusetts Institute of Technology and approved by the Planning Board lacked “vision” in a way that was “disheartening to anyone with a creative gene in them”; Denise Simmons was “furious” about lingering issues such as a parking lot the university has allowed to sit unused for years in Area IV, and told gathered city and institute officials, “if you need my vote, you don’t have it”; and Minka vanBeuzekom looked at the amount of work needed to iron out community benefits and other details and said “I don’t know how we can proceed with this whole petition, since [they are] a part of it.”

In addition, at Friday’s roundtable meeting Reeves, vanBeuzekom and councillors Leland Cheung and Marjorie Decker questioned the amount of housing in the plan, including what would be set aside for people with low and moderate incomes, and Cheung suggested a fix that would call for a potentially controversial change to a key basis of the requested zoning, called MIT PUD-5: building residential towers much, much higher than is called for now.

“How high can we go?” Cheung asked, giving a sense of his thoughts on the issue by asking how high Boston’s John Hancock Tower rises – about 800 feet, or 500 feet higher than the university was imagining in Kendall Square for a single residential building. 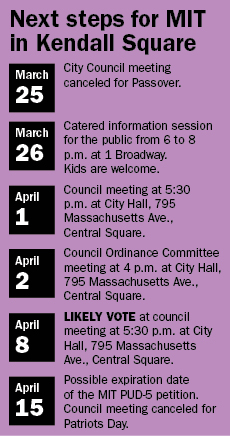 There were arguments heard in favor of the project as well. City Manager Robert W. Healy testified that the 26-acre plan would give the city an additional $10.5 million a year in property taxes from the institute, which at $36.5 million annually is already the city’s biggest taxpayer. Healy confirmed that the additional $10.5 million didn’t include estimated taxes on property that would go inside the new buildings.

In addition, university officials said the plan would bring at least “a couple of thousand” permanent jobs to the city, as well as 1,200 construction jobs “and probably a lot more than that” with buildout of the new office, lab, residential and retail spaces.

Martin Schmidt, an associate provost at the university, and Israel Ruiz, a vice president at the MIT Corp., also tried to soothe fears that graduate students were raising rents throughout the city by being forced to compete for off-campus housing. While the zoning petition expires April 15, according to the city’s Law Department, a just-convened university work group on housing issues is due to report its findings in July.

(Letting the petition expire doesn’t end the plan; if the council lets it expire without prejudice, the university can simply file it again without delay.)

The zoning petition “preserves flexibility” for the university to address housing after a council vote, Ruiz said, describing spots in the west campus on Vassar Street and elsewhere that could be turned into housing if needed.

Schmidt, meanwhile, released a memo showing that while the graduate student population has grown by 1,020 students since 1998, all but 209 have been “accommodated by expansion of MIT housing.” Also, the university was able to “offer housing to 84 percent of the graduate students that requested on-campus housing” last year, and he cited a 2011 survey showing that more than half of grad students living off-campus “wanted to live away from MIT.” The data painted a picture different from the concerns presented in a study by Brian Spatocco, president of the university’s Graduate Student Council, and anecdotally by faculty. It also failed to answer a question raised primarily by East Cambridge resident Heather Hoffman: Are the grad students being cited the ones that matter – the ones that need immediate or all-hours access to their labs?

Spatocco’s study has been interpreted as suggesting a need for 5,000 units of university housing to take pressure off costs throughout the city. He was asked Friday for comment. Responding April 1, he said simply that his study found “there is already a housing crisis in the city of cambridge” and that “further development of the city (especially that which creates new jobs) requires that there be a much better quantitative analysis of the housing situation in order to more quantitatively determine how much housing is appropriate”

“As we stand now, I don’t think anybody really knows how much housing would be needed for a project of MIT’s size/scope to protect the housing market,” he said. 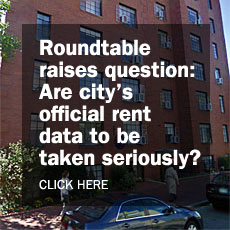 Another issue raised by Spatocco’s study Friday: the need to maintain a balance between the number of jobs and housing units. It was discussed by vanBeuzekom, Cheung and Stuart Dash, director of community planning with the city’s Community Development Department, with the councillors suggesting the balance had to be maintained within Kendall Square itself “We thought about how many units were going to be within walking distance, and within walking distance we looked not at only a tight little quarter-mile circle, but a reasonable 15-minute walk,” Dash said. “And that gets you closer to NorthPoint and up toward Central Square and the Osborne Triangle, not only Kendall Square, and that becomes sort of the reasonable universe for housing in Kendall Square.”

But that didn’t jibe with the findings of Goody Clancy, the consultant paid $350,000 to re-imagine Central and Kendall squares, Reeves said.

“The one gift Goody Clancy brought is that Kendall Square needs 4,000 units of housing to keep it vibrant and have people there,” Reeves said. “But this entire proposal is not to bring more people.”

The current plan calls for some 300 units of housing.

“There should be much more housing built,” vanBeuzekom agreed, and while Decker wasn’t convinced removing grad students from the housing market would solve the problem of soaring rents, she specified a need for more affordable housing in the plan.

Another big area of disconnect in the plan for vanBeuzekom: the 5 percent of space being carved out of the institute’s new commercial square footage for low-cost incubator space for tech startups, which built the square into what it is today but are now being pushed out as giant corporations move in. Her goal for innovation space is more like 33 percent, she said.

“I’m furious about it” 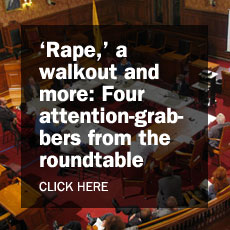 Simmons, though, wasn’t so much bargaining as telling the university its chickens had come home to roost on issues relating to job training and open space that is open to the community – but mainly on a decaying parking lot Cherry and School streets.

“It has been sitting empty longer than I can even try to recall. When we asked MIT to have teachers use the parking lot, we were turned down on several occasions. It’s not well-maintained, it’s an eyesore and I’m furious about it,” Simmons said. “It’s like sticking MIT’s finger in the face of Area IV. And it’s not important to you … but now you want something from us.”

Maher tried to intervene, saying a deal concerning the parking lot could happen within the coming week, and Steve Marsh, managing director of real estate with the MIT Investment Management Co., said the institute had held “internal discussions at the highest levels” on Simmons’ concerns.

“If my vote’s needed, you don’t have it,” Simmons said, “until there’s some resolution that benefits Area IV in particular … not unless there’s some prestidigitation, I don’t know how this happens by April 8. And it would not break my heart at all if this [petition expired and] was refiled.”

Reeves didn’t speak directly to which way his vote was leaning. But he had little but disappointment for the plans before him and didn’t suggest he had much to vote in favor of.

“I don’t know why, given all the intelligence at the table and the money, there isn’t more creativity present in conceptualizing what we can have in Kendall Square,” he said. “For all the money at this table, what do we get? It has no clothes on. It’s a skeleton, and I’m beginning to worry about that. I just don’t know why we can’t seem to get an actual vision of what it’s going to be. It’s a void.”

Maher added an Ordinance Committee meeting to the petition schedule for 4 p.m. April 2 and said there could even be another roundtable-style meeting before a council vote.