‘To the Wonder’: Malick makes us wonder a little too much 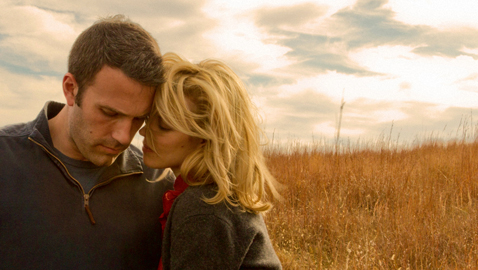 ‘To the Wonder’: Malick makes us wonder a little too much

The title says it all, and questions permeate. What’s it all about? Is Ben Affleck that wooden? Has Terrence Malick finally hit the skids and lost his uncanny ability to evoke through hypnotic lilts?

Many might have said the same about Malick’s last ﬁlm, “The Tree of Life,” which ended up on most critics’ top 10 lists and even Ebert’s ﬁnal top 10 of all time. Perhaps since that ﬁlm was a contemplation about life big and small and the intricate interweavings that ripple through time and the endless cycles of joy, misery and death we all experience, it had a profound impact on the famed film critic as the ﬁnal frame rolled.

It’s no wonder too, as that film was imbued with self-discovery and revelation, a veritable experience with different conclusions. Ask anyone who saw it and took something from it and they’ll likely have different interpretations and insights than you, and you’d both be right.

That’s where “To the Wonder” falls down. It lacks the power to provoke or engage. It’s ﬂat even by a non-Malick standard. The film begins on a light whimsical note as Neil (Ben Afﬂeck) falls in love with Marina (the lovely Olga Kurylenko from “Quantum of Solace”), a Parisian beauty. They have magical moments in Paris, on the Eurail (evoking memories of Richard Linklater’s “Before Sunrise”) and at the rapturous Mont Saint-Michel, the alleged wonder of the title. The two don’t really say much. They kiss and frolic and exist in what looks like eternal bliss, until they end up in an Oklahoma development full of big boxy houses, small yards and vast fields of amber. 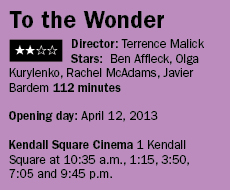 Yes, Marina has moved stateside with Neil. The two still really don’t talk. They make love, he sloshes around in the toxic mud that’s a byproduct of his arcane job as an engineer and downtrodden people, gaunt and diseased looking, crowd him – not sure whether to hug or sue – and then there’s Marina’s 10-year-old daughter, whose incorrigible indifference becomes a wedge between the two.

Neil and Marina drift apart. She goes back to Paris while he hooks up with an old flame (Rachel McAdams) but begins to pine for Marina again. So what gives? Neil gets bored with women (gorgeous ones too, I might add). The women, even though they flicker with effervescence, also seem adrift and unexcited.

And as full of ennui as the three leads are, none struggles more to find a reason to keep going than Javier Bardem’s priest. He plods wearily through the film tending to parched souls at a prison and the pods of impoverished poisoned by Neil’s work. His faith is constantly in question, and in one of the film’s more telling scenes, a sickly, rail-thin solace seeker knocks and Bardem hides in a dark corner and pretends to not be home.

Like “Tree of Life,” and even “The New World” and “The Thin Red Line” to lesser degrees, the theme of God and spiritual enlightenment runs throughout, and while that premise, because of Malick’s earlier successes, grabs you, the characters become a real problem. They’re just not engaging. One can be bored and spoiled, but when you’re that and you’re boring it’s a tough sell to keep the audience involved and hungry for that something deeper you’re trying to peddle.

“To the Wonder” ultimately sails off as a bemusement that feels like a poor man’s ripoff of “Tree of Life,” and when it’s all over you won’t be looking inward or thinking about Neil and Marina; you’ll be wondering if the enigmatic auteur who crafted the vivid and fulfilling classics “Badlands” and “Days of Heaven” in the ’70s, then inexplicably took a 20-year hiatus, has drifted off into the land of meta and become irrelevant. I hope not, but I wonder.