Bells will ring, city will go silent at 2:52 p.m. to honor victims 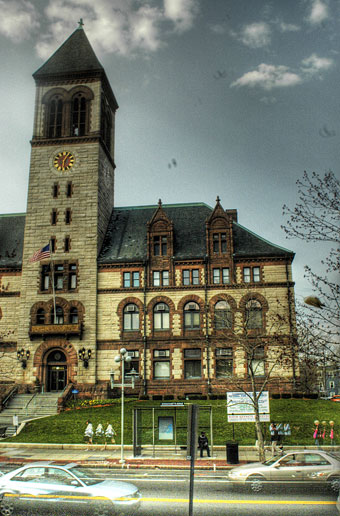 Bells will ring, city will go silent at 2:52 p.m. to honor victims

At about 2:52 p.m., the City Hall bells will ring for four minutes in memory of casualties from the past week’s violence.

Today at 2:50 p.m., the city will observe a moment of silence to honor the victims of the violence that began at last week’s Boston Marathon. At about 2:52 p.m., the City Hall bells will ring for four minutes in memory of the four casualties from the incidents.

Citizens are urged to “join us in this special tribute.”

It is part of a stateside moment of silence requested by Boston Mayor Thomas M. Menino, Gov. Deval L. Patrick and the One Fund Boston charity set up last week.

The setting off of two bombs at the finish line of the Boston Marathon on April 15 killed three people, including 8-year-old Martin Richard of Dorchester; Krystle M. Campbell, 29, a graduate of Medford High with the Class of 2001, manager at Jimmy’s Steak House in Arlington and before that a manager with Jasper White’s Summer Shack Restaurants; and Lu Lingzi, a Boston University graduate student from Shenyang in northeastern China.

Tamerlan Tsarnaev, 26, and younger brother Dzhokhar A. Tsarnaev, 19, of Norfolk Street in Cambridge, were identified as suspects in the attacks and hunted in a massive police effort that stretched long into Friday evening. Tamerlan was killed during a car chase and shootout with police. Dzhokhar, also a student at the University of Massachusetts at Dartmouth, was taken into custody and hospitalized.