Citizen petitions city for third time to stop glare, get enforcement of its own light law 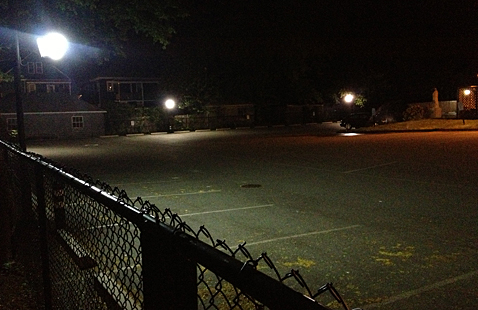 Citizen petitions city for third time to stop glare, get enforcement of its own light law

Neighbors of St. John the Evangelist Church in North Cambridge have complained about glare from its parking lot security lights. (Photo: Marc Levy) 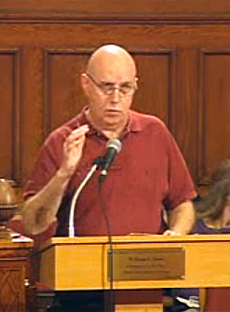 Charles Teague, seen in a still from a City Council meeting video, has a zoning petition before city officials for the third time.

It’s a very simple goal: Stop light from glaring into neighbors’ property by pointing light fixtures toward the ground.

There’s even a zoning law on the books saying that in half the city’s residential districts’ lighting must be “installed in a manner that will prevent light from shining onto any street or adjacent property” – yet complaints keep coming, resulting in a zoning petition going before city officials for a third time with a rephrasing of that very simple mission: to amend city zoning law “so that said law can be enforced.”

The proposal, called the Teague Petition after citizen author Charles Teague, gets a televised hearing at 4:30 p.m. Thursday before the City Council’s Ordinance Committee, then a hearing before the Planning Board at 7 p.m. May 21.

If it passes this time, Teague will be a hero to residents such as Carol Lynn Alpert, of Cushing Street, and Lizzie de Rham, a neighbor of Vineyard Church in North Cambridge.

The church has “shone a glaring, unnecessary spotlight into my bedroom window for years – this despite two streetlights within 20 feet of where they put this light,” de Rham said.

Carol Lynn Alpert says she has two neighbors with high-powered lights that can go off at any hour.

Alpert said she has two neighbors with high-powered lights that can go off at any hour. “When he turns it on, the light blasts into all the north windows of my house, sometimes making it difficult to sleep in the bedrooms upstairs. The light also blasts my backyard and my quiet little back deck. I cannot sit with family and friends on my deck in the evening when the light is glaring in our eyes. I never know when the light will be on or off,” Alpert said of one.

In each case, Alpert and de Rham said they’ve spoken with the offending neighbors and officials such as police or city inspectors, but promises to address the problems have gone unfulfilled.

“It’s extremely frustrating to me, akin to having neighbors who smoke cigarettes or blast loud music nearby in the evening when you’d like to have your own windows open,” Alpert said.

Resident Brooksany Coe in the Raymond Park neighborhood created an online petition to urge the city to address “dusk to dawn” lighting on large apartment complexes that are shining in neighbors’ windows and even keeping birds chirping throughout the night. Her year-old petition had 72 supporters as of Tuesday, all signing on to ask “compliance with city lighting codes” from private landlords such as Walden Park Apartments and on Cambridge Housing Authority property.

Such complaints date back to at least November 2007, when eight of the nine-member City Council heard enough of them to ask that City Manager Robert W. Healy report back on how the city could enforce its own light ordinance – noting in their policy order that glare from neighboring properties’ lights “can be mitigated through proper positioning [and] appropriate angling.”

Councillors didn’t seem to mind too much when Healy’s report back answered none of their specific questions, instead saying only that the city’s Inspectional Services Department enforced the law as written. Craig Kelley, the author of the order, had to repeat its questions to Healy, including asking how many complaints there’d been since Jan. 1, 2006.

“Not that many,” Healy said. When then-mayor Ken Reeves asked how old the ordinance was, Healy didn’t know.

But as complaints persisted, many over parking lot security lights at St. John the Evangelist Church in North Cambridge, it was less than two years later that councillor Henrietta Davis was saying at a Health and Environment Committee hearing:

that perhaps it is time to take the regulation of lighting to a more sophisticated level of establishing quantifiable requirements, in a fashion similar to the way that the noise ordinance has evolved to include more measurable standards.

The first Teague petition was filed in August 2011; it was refiled in December 2011 by councillor Leland Cheung. In each case city officials let it expire. Councillor Sam Seidel – who handled the petition in the Ordinance Committee until he was voted out of office – said he thought lighting was “going to prove to be a very difficult matter for zoning to solve.” When Cheung led a 6-3 vote on Dec. 5, 2011, to refile the petition and reconsider it, a lame duck Seidel said, “My issue is more that I think if the petitioner in this case wants it before the council, he ought to bring it before the council [himself] in a subsequent council.”

When the petition was before the Planning Board, its members wound up asking a lighting design firm expert who happened to be speaking during public comment if he could help define some of the terms they found too loose to approve. The speaker, Glenn Heinmiller, of Cambridge-based Lam Partners, suggested that an alternative to a citizen and lay person trying to write law addressing common light complaints would be for the city to write “a proper lighting ordinance.”

Teague said Saturday that he’s written the latest version of his petition to be as simple as possible to try to get around arguments such as the Planning Board’s that terms are undefined. “This time I crossed out the word ‘glare’ and just used the term ‘direct light,’” he said:

I’m doing this because where I live there’s lights in parking lots and they shine in my windows. But if you go down to the Building Department and you say, “Look, the zoning law says parking lot lights aren’t supposed to cause glare,” they say, “That’s nice, but ‘glare’ is not defined.” Then you say, well, “You can’t shine lights on me because I’m in a residential neighborhood.” They go, “Well, that’s nice, but the light is actually in a business district – and, by the way, ‘direct light’ isn’t defined.”

“This is nothing new, this is just the law being broken,” Teague said, complaining that city officials “never take any action.”

Jo M. Solet, a researcher in Harvard’s Division of Sleep Medicine, says she supports the effort to restrict intrusive lighting.

Jo M. Solet, a clinical instructor in medicine at Harvard Medical School and researcher in the Division of Sleep Medicine, said she supported the effort to restrict intrusive lighting because it  can interfere with humans’ natural circadian rhythms.

“Sleep is critical to health and well-being. This is scientifically undisputed,” Solet said. “There is also little doubt that security and street lighting can be designed and placed in ways that are not intrusive to neighboring residences.”

She also seemed surprised that a goal as simple as an enforceable law that pointed lights downward instead of toward residential windows was taking such an effort to put in place.

“Cambridge is internationally known for innovation, for our role in advancing technology. It is possible to have a vibrant city and good quality of life,” she said. “Our government should step up and support efforts that meet both of these goals.”