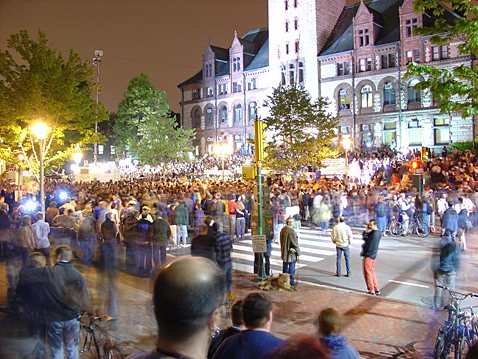 Finance website NerdWallet has put together a list of the most gay-friendly cities in the country based on municipal laws, community and peer support, and safety and tolerance, and Cambridge – site of the first wedding licenses issued in the first state to make it legal for same-sex couples to marry – comes in fifth.

The 88-city survey says it assessed municipal laws affecting LGBT residents by using the Human Rights Campaign’s Municipal Equality Index, which “measures the equality of each city’s non-discrimination laws, relationship recognition, employment practices, city services, law enforcement and municipality leadership”; added the percentage of same-sex households in the region from the U.S. Census; and looked at the  number of hate crimes for sexual orientation per 100,000 residents.

The People’s Republic of Cambridge has zero sexual orientation-related hate crimes in 2011, making this a safe and tolerant area for gay residents. Cambridge is the residence of gay rights activist and Senator Elizabeth Warren.

January’s list of Gayest Cities in America from Advocate.com (self-proclaimed as “totally subjective and constantly changing”), meanwhile, didn’t even include Cambridge, after the city took third last year. Massachusetts was instead represented by Springfield at No. 2.