‘After Earth’: Nepotism gone awry on an Earth gone bad 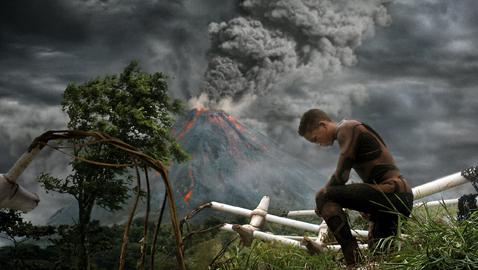 ‘After Earth’: Nepotism gone awry on an Earth gone bad

I like Will Smith, I do, but I can’t say I am liking his choice of films as of late. Sure, the upcoming “Winter’s Tale” has a ton of firepower to it, but Mr. Smith purportedly turned down Django in “Django Unchained” because he felt the role wasn’t a lead. Then there’s that rumored remake of “The Wild Bunch” that has the Peckinpah faithful hearing fingernails on the chalkboard, and now this ill-advised project with M. Night Shyamalan, who’s made exactly one quality film, a few intriguing follow-ups and been on a disastrous slide ever since. 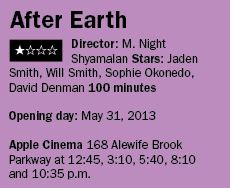 If you’re wondering why the actor, who holds an obvious penchant for sci-fi, would jump in the water with a man on his last breath, the answer is likely his son. “After Earth” is not a Will Smith movie, but a Jaden Smith movie. The young thespian held his own with dad in the underrated and wholly affecting pull-yourself-up drama “The Pursuit of Happyness” and was effective in “The Karate Kid” reboot. But this, this is Jaden’s coming out party, a big-screen bar mitzvah for Papa Smith to declare to the world, “My son is an actor.”

Well, not so fast, Will.

It’s 1,000 years in the future. Humans no longer live on Earth, but on some far-away planet where the bane of existence is a beast called the Ursa. Sounds like a bear, but it’s a giant hellbender salamander with pincers and an “Alien” appetite for humans. Ursas are blind, but can easily pick off victims because of fear pheromones. Will and Jaden fittingly play father and son. Dad’s Cypher Raige, the highly regarded Zen general who has all the stoicism and success of Phil Jackson, while junior checks in as Kitai, a, a newbie cadet in dad’s army haunted by the loss of his sister (Zoë Kravitz – yes, Lenny’s progeny) to an Ursa.

The pair, along with a legion of military personnel, set off on a training mission aboard a ship carrying a cocooned Ursa in its hold. Why is scantly explained, but then again not much makes sense 1,000 years into the future. They have warp drive space ships, but fight with double-bladed pole arms that retract crisply like a light saber. No cool semi-automatics or laser blasters? Or how about the man who lost a leg in a battle with an Ursa and is confined to a wheelchair – no bionics or even a blade runner?

Such questions abound throughout and become increasingly aggravated by the stiff direction, hokey futuristic sets, inert dialogue and equally unimpressive acting. Yes, Will too.

In any case, after a meteor storm, the ship crashes and Cypher and Kitai are the only two who survive (along with the Ursa). Cypher’s legs are broken, so he must sit in the fuselage while Kitai treks four days to get to a critical communication module that landed a hundred clicks away when the ship broke apart on entry.

Oh yeah, the planet they landed on is Earth. It’s not really explained why, but it’s become a bit of a hellhole. Somehow, somewhere along the line Mother Nature got angry (for us mucking up the scenery and souring the seas?) and kicked our ass, mutating giant eagles and swarms of ravenous man-sized baboons. The temperature sways between tropical and sub-freezing each day, even though it looks lush, verdant and inviting and the flowers bloom and buffalo roam as if it’s a stable climate.

There’s also the weird notion that man can only sort of breathe on the new Earth, and on this new Earth, Cypher warns, “every life form has evolved to kill man.” But once again: Say what? You can build a spaceship with a nuclear fusion drive, but you can’t take out a troop of oversized baboons?

The bulk of the film is Cypher sitting in a chair – a burnt-out game console, if you will – shouting commands into the earpiece (well, actually, a wrist piece, but you get the idea) of his charge as he evades the local fauna and the Ursa.

I’ve never seen Will Smith so stiff before, and I wonder now if all that early praise for Jaden was premature. And for such a high-powered concept I was amazed at the degree of fluctuation in FX, which ranged from brilliantly seamless to a gooey slathering of Cheez Whiz.

In the wake of such wreckage, who knows if Shyamalan will ever make a feature again? I hope he gets a chance at redemption. And Will will be fine. He’s been here before with “Wild Wild West” and proven to be bulletproof. Then there’s Jaden. He’ll get another shot and he should use it wisely. He’s got an in, and Will shouldn’t push too hard. I appreciate the parenting instinct, I truly do – but don’t give into nepotism or the egotistical desire for legacy. You’re making bad picks for yourself, Will. Don’t do your son the same disservice.