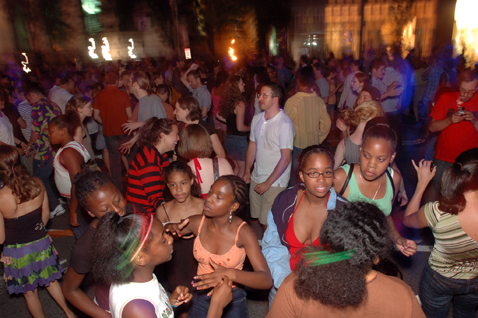 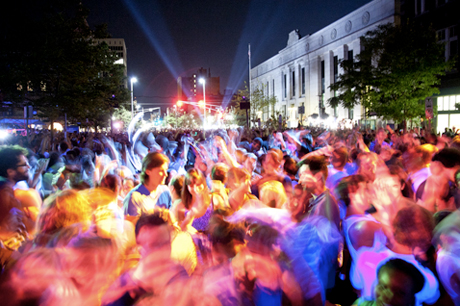 The city’s annual Dance Party will take off – and close off some of Massachusetts Avenue in Central Square – from 7 to 11 p.m. June 28.

The annual dance extravaganza with DJ-spun music is “a special opportunity” for the community to celebrate summer, organizer Maryellen Carvello said. “After dark, colorful lights will be launched, adding to the magic of the evening.”

Conceived in 1996 as part of the 150th anniversary celebration of Cambridge, the Dance Party is free and open to the public. Kathy Born, a former city councillor and now chairwoman of the Cambridge Redevelopment Authority, recalled helping get the party started.

“I love dancing and I think it brings people together. I have fond memories of what we called block dances as kids where I spent my summers on the New Jersey shore – in a place that is literally no longer there thanks to Hurricane Sandy,” Born said. “When I suggested a version of this for Cambridge, there were some naysayers at first, because of the closing of Mass. Ave., but the diversity of the crowd – diversity of all kinds, including ages – was a winning attribute from year one.”

The event draws about 5,000 people, as well as calls from other communities seeking advice on having their own dance party, Born said.

“The crowd has grown from year to year, and I am thrilled,” she said.

Massachusetts Avenue will be closed between Inman and Bigelow streets during dance hours. The MBTA’s No. 1 bus line will terminate in Central Square at 6 p.m. and resume full service at 11:30 p.m., with the red line subway taking its place for travel between Central and Harvard squares.