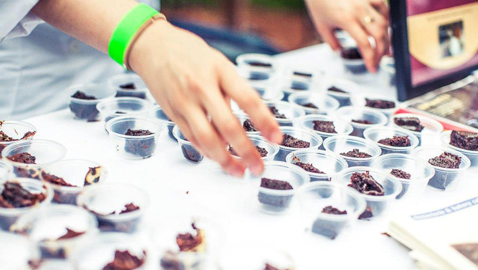 Update: The 11th annual Taste of Cambridge is scheduled for July 11 after a second delay due to an ominous weather forecast, organizers said Tuesday, only hours before the event was set to begin.

“Having rain on our rain date is unprecedented,” organizers said in an e-mail. “We will put a plan in place for an indoor back-up location for the 11th.”

The event will run from 5:30 to 8:30 p.m. (with the VIP area open an hour later) June 18 in University Park at the Landsdowne Quad and Sidney Street near Central Square, “pairing the best restaurants in Cambridge with University Park’s lush sculpture gardens.”

The same 100-plus Cambridge restaurants are due, along with musicians the Hot 8 Brass Band, The Dirty Water Brass Band and DJs from the Mmmmaven Project, the city’s DJ school. The event is to celebrate the Cambridge restaurant community and raise money for our the charities Caspar, Faith Kitchen, On the Rise, CHAF and Food for Free.

“After thoughtful consideration of the changing forecast for this Thursday and in fairness to our restaurant participants, who invest so much time and energy into the success of the Taste of Cambridge, we have decided to postpone,” Lapidus said.

Her description of the event:

Each year foodies from near and far come together to sample the award-winning cuisine that illustrates why The Boston Globe and National Geographic Traveler stated that many of the best restaurants in Boston are in Cambridge! See and taste for yourself why Cambridge is one of the most highly acclaimed restaurant destinations throughout New England and the world!

General admission tickets are $50 in advance or $60 at the door and include four glasses of beer or wine. VIP tickets are $75.