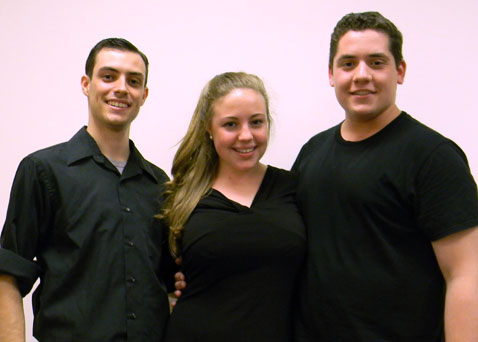 Christopher Brousseau, Courtney Duffy and Joshua Mauro are in “Cabaret” from July 19-21.

Cambridge actors are hitting the road this summer, heading to Weimar Germany and Penzance, England – by way of West Boylston and Hingham.

Kander and Ebb’s “Cabaret,” presented by the Moonstruck Theater Co., runs four performances between July 19-21 with 18 performers from the Boston area, including Cambridge residents Christopher Brousseau as aspiring U.S. author Cliff Bradshaw and Courtney Duffy and Joshua Mauro as Helga and Klaus, dancers at the Kit Kat Klub – where singer Sally Bowles works as the Nazis bring the world crashing down.

Performances are at West Boylston Junior-Senior High School, 125 Crescent St., West Boylston, and tickets are $17 general admission and $12 for senior citizens and students. For tickets, reservations or information, go to moonstrucktheater.org or call (508) 251-9224. 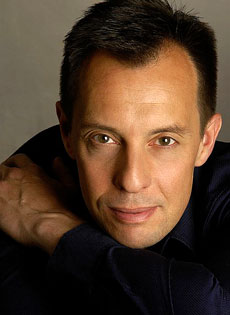 Baritone Paul Soper is set to appears as Samuel in the South Shore Conservatory’s “The Pirates of Penzance.”

Cambridge’s Paul Soper appears as Samuel in the South Shore Conservatory’s Evenings Under the Stars performance of Gilbert and Sullivan’s “The Pirates of Penzance.”

This is semi-staged production touted by the conservatory as having “high-quality singers, first-rate chorus and gorgeous summer setting.” As Samuel, the bookish lieutenant to the Pirate King who leads the first song of Act I, Soper is among those high-quality singers: He made his baritone operatic debut with Houston Grand Opera and has sung principal and comprimario roles with Boston Lyric Opera, Brooklyn Academy of Music, Glimmerglass Opera, Opera Naples in Florida and with the National Touring Co. of New York City Opera. He’s been Don Giovanni with MetroWest Opera, Noah in “Noye’s Fludde” with the Falmouth Chorale, Dr. Malatesta in “Don Pasquale” with Cape Cod Opera, Baron Zeta in “The Merry Widow” and Don Alfonso in “Cosi fan tutte” with Opera Providence, Ariodate in “Xerxes” at the Connecticut Early Music Festival, Guglielmo in “Cosi fan tutte” and Raimondo in “Lucia di Lammermoor” with Commonwealth Opera.

The performance is 7 p.m. July 27 at the Jane Carr Amphitheater at One Conservatory Drive, Hingham. Tickets bought in advance are $35 for pavilion and $20 for lawn seating for Saturday evening concerts. Lawn tickets bought at the door are $25. There is no charge for children under 3. Tickets and boxed dinners may be bought here.