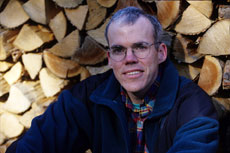 World-renowned environmentalist Bill McKibben has added his name to the Connolly petition and endorsed the efforts of Cambridge residents to enact the nation’s first “net zero” zoning standard for new development projects.

Speaking July 21 before a crowd of about 250 people at the First Parish Unitarian Universalist Church in Harvard Square, McKibben called on political leaders to put a price on carbon pollution and suggested that it’s the fossil fuel industry – not environmentalists – who are the true zealots in the debate over climate change.

“We are not the radicals,” McKibben told the audience. “Radicals are willing to alter the chemical composition of the atmosphere in order to make more money.”

After being introduced and welcomed by First Parish Senior Minister Fred Small, McKibben opened his remarks with an update on his work with 350.org, including steps he is taking to prepare people for Sunday’s civil disobedience action at the Brayton Point Coal Plant in Somerset.

Afterward, McKibben met with members of the Cambridge Committee for Net Zero Buildings and discussed the details of the net zero proposal pending before Cambridge officials.

“What a great initiative!” McKibben said. “If we’re going to stop climate change, we don’t need to just cut our carbon emissions a little bit – we need to cut them down to zero.”

McKibben was one of at least 40 environmentalists to sign a hard copy of the petition July 21. He followed up with net zero organizers to confirm his support for the proposal.

McKibben is credited with writing the first book about climate change, “The End of Nature,” in 1989. He has been called “the world’s best green journalist” by Time magazine and “the nation’s leading environmentalist” by The Boston Globe.

Mike Connolly is working with members of Green Cambridge to organize support for the Connolly petition for net zero development in Cambridge.