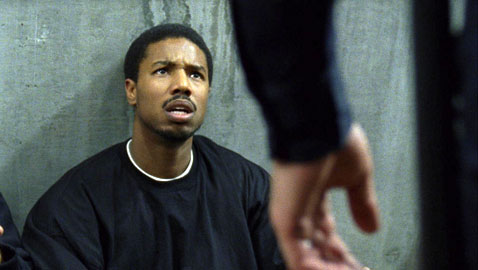 In the wake of the George Zimmerman trial and the cries of justice for Trayvon Martin, “Fruitvale Station” could not come at a more appropriate time. It won’t ease the current emotional swell, but it will aid in furthering the conversation. 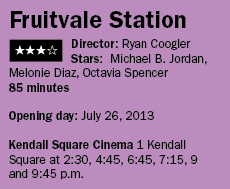 At 2 a.m. New Year’s Day in 2009, Oscar Grant, a 22-year-old black man, was shot and killed by a transit cop as he lay face down and partially restrained on the platform of the subway stop of the title. It was a tragic end to a buoyant and hopeful evening as Oscar and his friends tried to make their way back to Oakland, Calif., from a sojourn across the Bay to see the fireworks.

Much of the inexplicable act was caught on cellphone video. The cop, who later said he meant to draw his Taser, was sentenced for manslaughter, but that’s not what drives “Fruitvale Station.” It may be what ultimately defines it, but Ryan Coogler’s explorative lens is more concerned with the odyssey of a young man struggling to go right in a world stacked against him – a world that he had a hand in skewing. And, yes, it’s about race too.

Coogler begins with some of that fateful cellphone video, then we fade out and rewind to earlier in the day and follow the events that lead up to the tragic moment, in the process absorbing the essence of the person known as Oscar Grant. “Fruitvale,” while it uses a smattering of real footage, isn’t a documentary per se, but a dramatic recreation. The smart casting lets Michael B. Jordan breathe a soul into the memory of Oscar with Academy Award nominee Octavia Spencer as the loving but stern mother.

Jordan, whom you might recognize from TV’s “The Wire,” has a long sad face with sleepy, kind eyes; a bit like our old Celtics hero, Paul Pierce. For most of the film the camera hangs tight on that mug as Oscar drives around or lingers in his kitchen, wondering, contemplating, torn and wanting to do the right thing. What confronts Oscar is his past and the present situation: He’s a man in transition, having just surrendered his run-around girlfriend and committed to Sophina (Melonie Diaz), with whom he has a young daughter, but then there’s the revelation that Oscar’s somewhat recently out of jail and he’s just lost his job as a butcher for being tardy too often. He desires to succeed in a straight-up fashion and doesn’t want to go back to dealing dope, but how to make ends meet? It doesn’t help either that he keeps Sophina and his mother in the dark as to his recent change in employment status.

“Fruitvale” bears the tag of “based on true events,” but Coogler, who was a USC film student at the time the project began (Forest Whitaker is one of the producers) and is approximately the same age as Oscar Grant and black as well, never takes liberties with the license afforded him. If there’s any heavy-handedness it comes in the contrivance of black and white interaction, like the white-bread blonde who’s initially apprehensive when Oscar approaches her in a hoodie in a supermarket offering her tips on a “fish fry” (she later happens to be on the train when the altercation goes down that triggers the unnecessary shooting), and then there’s the racist inmate who during visiting hours between Oscar and his mother drops a few F-bomb and N-word couplings and worse – moments that feel forced and unnatural, but ultimately help fill the bigger canvas.

The true power of “Fruitvale” permeates the quiet reflective moments as introspective players grapple with their own failures and the outside influences that have stained their lives. John Singleton applied the same nuanced approach to “Boyz n the Hood.” Not bad company (and a fellow Trojan as well). The concluding frames of “Fruitvale,” as Oscar’s family and friends cling to slim hope, are wrenching. The pain of loss of life is universal, no matter what color you are. Coogler knows this and articulates the moment with profound effect.