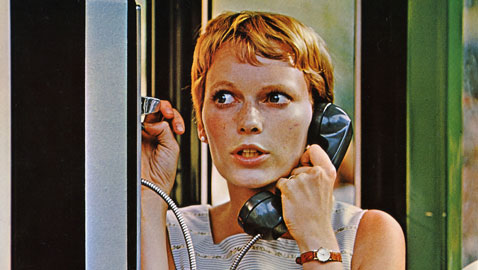 “Rosemary’s Baby”: Perhaps the most viscerally chilling horror film of all time. (The other film that comes to mind, “Repulsion,” was also directed by Roman Polanski.) The plot may sound cheesy – an aspiring actor (John Cassavetes) pimps his wife out to the devil so he can further his career and Lucifer can get his anti-Christ offspring – but Polanski builds it from Ira Levin’s novel, a deep-delving character study rooted in the reality of the day (1968). Mia Farrow is perfect as the disoriented ingénue and Ruth Gordon won an Oscar for her turn as a borscht-belt coven queen. The ’60s and ’70s were one of the greatest eras in cinema, and Polanski was a major contributor. Classic and not to be missed on the big screen. At the Brattle Theatre, 40 Brattle St., Harvard Square, throughout the weekend.

“Cul-de-Sac”: if you can find it, another gem from Polanski, which he made two years before “Rosemary’s Baby.”   Crooks on the run take over a beachfront manse that resembles a medieval castle. The well-to-do occupants are milquetoast pushovers, but eventually the outside pressure and cloistered confines cause relationships change and reform in strange and unpredictable ways. Akin to Sam Peckinpah’s “Straw Dogs” or Michael Haneke’s “Funny Games” in its macabre build-up and nervy volatility. With Donald Pleasance as the meek man of the manor.