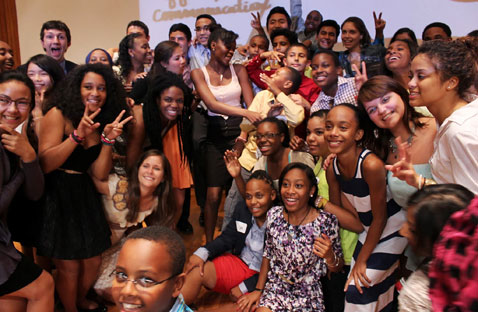 Students showed off their work in the auditorium’s lobby.

Breakthrough Greater Boston, a nonprofit that moves under-resourced students toward four-year colleges while training the next generation of urban teachers, marked a breakthrough of its own this month: dual celebrations to mark its first year operating a summer program in Boston that matches that of its Cambridge home (now in its 21st year).

The annual Celebration event – a culmination of the intensive, six-week summer version of its “students teaching students” model – was held as usual Aug. 10 at the Massachusetts Institute of Technology’s Kresge Auditorium with help from Baja Taco Truck, Bon Me Foods and Subway. Hundreds of guests made up of participant families, Breakthrough supporters and sponsors were on hand to interact with middle and high school students within the program and speak with the college students who came from across the globe to lead Breakthrough classrooms. Included in the event was a reception and walk-through exposition of student projects, followed by award presentations, speeches and testimonials, performances and songs.

Five days later came a second Celebration, this one at the University of Massachusetts at Boston’s McCormack Theater, to mark the first summer at Breakthrough’s newest location, at TechBoston Academy in Dorchester, with its inaugural class of 30 seventh-graders and 10 college intern teachers.

A photo album of the Cambridge event is here.