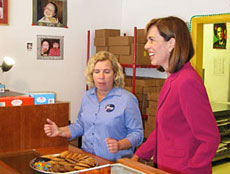 The Lakota Bakery’s cookies were sweet, and so was the Labor Day message for those seeking to boost the minimum wage.

Katherine Clark, a Democratic candidate for the 5th Congressional District, urged an increase in basic pay, encouraged by Barbara Weniger, owner of the bakery in Arlington, who pays her seven employees above the minimum.

During a tour of her store, photos on the wall reflecting support for President Barack Obama and Deval Patrick, Weniger said: “I’m proud that I pay above the minimum wage, because I never wanted to squeeze every cent I could from the people who work for me. That’s not why I got into business. People worry you can’t pay employees living wages and stay in business. I have.”

Asked about fears many business owners have about the impact of a higher minimum wage, the South Dakota native who was born on a farm said her employees “go get lunch down the street,” supporting Arlington businesses.

She said her employees award her with loyalty; many have been working at the bakery for at least a dozen years.

Clark said, if elected, she would push for an increase in the minimum wage to $11, a proposal that goes beyond Obama’s goal of $9 an hour, and would support expanding the Family and Medical Leave Act. The law allows for up to 12 weeks of unpaid leave as well as the continuation of health benefits during that time, but the campaign says that covers less than 60 percent of U.S. workers and does not include paid leave.

“When we take care of our workers, we’re taking care of the spouses, children and grandparents who depend on them too,” Clark said. “It’s time for Congress to raise the minimum wage and expand family medical leave so that we can strengthen our families.”

Congress has not approved an increase in the federal minimum wage since 2009. It stands at $7.25 per hour.

A crowd amid a crowded field

Clark, from Melrose, drew voluble support from Weniger, who has owned Lakota for 22 years, and another estimated 25 people attended the noon rally. Many held campaign signs at a nearby intersection as well as at the 1375 Massachusetts Ave. store.

Clark and Weniger offered platters of cookies during the visit. The cookies are sold in stores around Cambridge including Cardullo’s in Harvard Square, Pemberton Farms in North Cambridge and S&S Restaurant in Inman Square.

Clark is among seven in her party seeking a win in the Oct. 15 primary for the seat vacated by this summer by Edward J. Markey. Three are Republicans.

A lesser-known Democratic candidate, Martin Long, was profiled Tuesday at YourArlington.com. He says his high-tech background at IBM sets him apart, as well as a laser-like focus on reforming government gridlock.