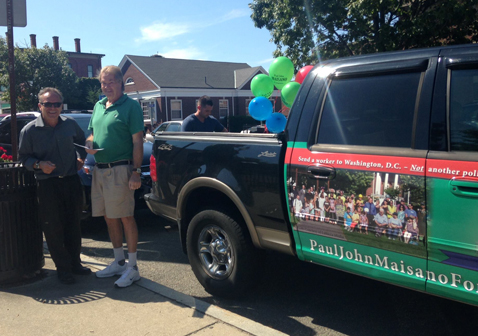 Seven Democrats seek to win the Oct. 15 primary for the seat for the 5th Congressional District vacated this summer by Ed Markey. Five of the candidates who are current officeholders have been invited to three local forums. In response, Paul John Maisano of Stoneham has said he would boycott such events, and Martin Long of Arlington plans to show up anyway.

Events include one scheduled for the Kennedy School of Government today; one Sept. 18 at Lesley University; and a forum held by Rep. Jay Kaufman in Lexington set for Sept. 23.

All seven candidates are set to attend a panel discussion in Watertown on Tuesday sponsored by the Belmont and Watertown Democratic town committees, the first formal event to include all of the contenders.

A spokesman for the Long campaign said today: “We respect Paul’s position and thank him for his support. Talking to various groups is very important to us, so our approach is different. Martin intends to show up at any public event that we learn of and let the organizers deal with that. He’s communicated that position to Paul.”

It has come to my attention that a group of institutions are sponsoring public forums to discuss issues for the upcoming Oct. 15 special primary selection for Congress. Unfortunately, a few of these are employing exclusionary measures in an attempt to filter out candidates prior to the public primary election. Any attempt to disable a qualified candidate from participating on a level playing field is wrong …

Tonight, a Harvard College Democratic group is sponsoring such an event at the Kennedy School of Government. It is public knowledge that there are seven candidates qualified under the statutory requirements of the Commonwealth of Massachusetts. However, for some unknown reason, the Harvard group has recognized only the five candidates who currently hold offices in the state government, excluding the balance of the field. This was not an oversight! …

This intentional narrowing of the field does not serve the public’s interest, nor is it accepted within the language of the U.S. Constitution, or the Massachusetts statues on elections … Lesley College and the Progressive Voters Forum are practicing irresponsible exclusionary measures. This behavior usurps the guarantee of equal opportunity access within our democratic process.

He called upon all voters and candidates to join his boycott. “By attending such events it supports discriminatory practices,” he said. “We must protect our political due process. The time to end this malignancy is now.”

The event at 8 tonight, sponsored by Harvard College Democrats, is set for Starr Auditorium, Harvard Kennedy School, 79 JFK St. It is described as a meet-and-greet and candidates forum.