Watch this weekend: ‘Enough Said’ sweet side of Holofcener of ‘Friends with Money’ 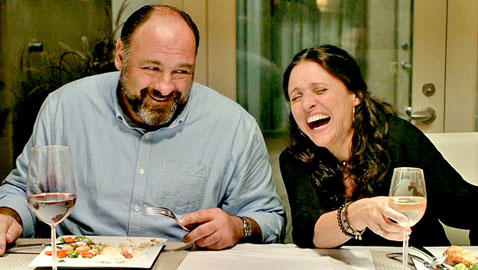 Watch this weekend: ‘Enough Said’ sweet side of Holofcener of ‘Friends with Money’

“Enough Said”: James Gandolfini, aka Tony Soprano, may have left us too early, but there are still two posthumous films you can catch him in. One is the upcoming crime drama “Animal Rescue” and the other is Nicole Holofcener’s “Enough Said,” which begins a run this weekend at the Landmark Kendall Square Cinema, 355 Binney St., Kendall Square. The film, about two divorced, middle-aged people with children leaving the nest, connecting and trying to find a more mature version of love, is heartfelt, genuine and imbued with life lessons and shards of wit. It’s a sweet, humble performance by Gandolfini and Julia Louis-Dreyfus is a perfect counterbalance as a massage therapist who overthinks every interaction. Holofcener regular Catherine Keener and Toni Collette are superb as the ex-wife and best friend. The twists in the film are deft, slyly affecting and telling. It’s a small victory for all involved.

“Friends with Money” (2009): Another Holofcener portrait of aging badly, but finding the silver lining in a sequence of otherwise stormy mishaps. The film revolves around a quartet of women, three of whom have money and one, Olivia (Jennifer Aniston) who has had a few stumbles in life and now toils as a maid – which makes dinner outings at fancy restaurants awkward, to say the least. The group interactions with husbands and significant others are rife with tension, as are the gossipy one-on-ones. The excellent cast also included Frances McDormand, Keener and Joan Cusack.