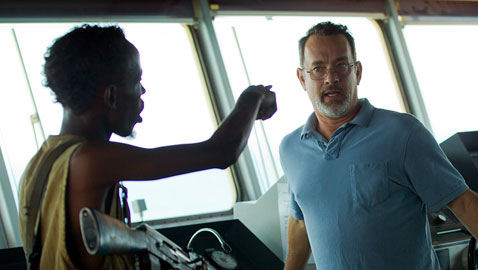 Back in 2009 the world watched rapt as a U.S. cargo ship was seized by pirates off the coast of Africa. To save his crew, the captain offered himself up as hostage and was subsequently cordoned off in a lifeboat pod with a posse of armed and anxious pirates looking for a multimillion-dollar ransom. Eventually the Navy and SEAL Team 6 got involved and brought about a quick resolution. It made for great drama then and would seem a natural fit for film, but as harrowing as “Captain Philips” is, it never quite gets below the surface of the whole ordeal. 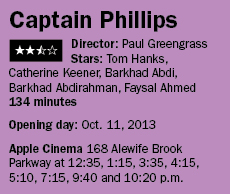 All of this might come as a bit of a surprise, because “Phillips” is directed by Paul Greengrass, who so adroitly chronicled the intrepid doings of doomed 9/11 passengers in “United 93.” His insight and meticulous care for every passenger and their story and plight rang through cleanly and with genuine earnestness. Here that acumen feels lost or, at best, severely muted.

“Phillips” begins rather no-nonsense, with the captain (Tom Hanks) and his wife (Catherine Keener) driving to the airport and bantering about how their children are growing up in a harsh world where being righteous and diligent isn’t enough anymore (perhaps an omen of what’s to come?). Shortly after, Phillips and his crew load up food aid for Africa in the Arabian Peninsula and do a once-over of the Maersk Alabama. Phillips is working with a new crew that aren’t quite up to his standards, and neither is the ship – which has ominously unsecured “pirate gates.”

As a result of such shabbiness, once underway around the Horn of Africa, Phillips insists on drills. But just as he sounds the alarm, two speeding skiffs packed with armed men comes at the enormous cargo carrier. The Somali pirates fail in their first strike, but have a trailing mother ship for refueling and are back nipping at the Alabama the next day.

Three things drive these men on the high seas: money, mind games and stimulants. The pirates, who can speak English, fake being the Somali Coast Guard while Phillips, knowing they are listening in, pretends to call in an air strike and later, after the Alabama is boarded, lies about the operational condition of the ship. The Somalis, gaunt and angry, gnaw on a narcotic stimulant known as khat and, when offered $30,000 to just be gone, laugh and mention that their last take was $6 million, to which Phillips asks, “Then why are you doing this?” It’s a good question that never gets adequately addressed.

Phillips’ men too see the situation as a transaction and don’t want to take on the task of repelling the pirates (they use a series of high-powered water cannons) because they’re not getting paid enough. They end up hiding in the hold while Phillips deals with the intruders.

There are some intriguing bits of chicanery deployed by Phillips and his crew to stem the pirates, but eventually Phillips ends up in the survival capsule with the armed men and the U.S. Navy on their tail. That’s where the film breaks down, or goes on too long. It becomes an endless loop of pirates debating whether to kill Phillips and the Navy searching eternally for the right moment to attack. One thing is a given: the United States will not allow the Somalis to take Phillips ashore alive.

The film, based on Phillips’ memoir, “A Captain’s Duty: Somali Pirates, Navy SEALs and Dangerous Days at Sea,” has come under fire by crew members who claim it’s a gross fictionalization of what really happened and from the company accused of sending the Alabama through pirate-infested waters to save on fuel costs.

The recent Danish film “A Hijacking” covered a similar real-life arc with great depth and soul by burrowing into the lives and motivations of those in peril, as well as their captors. Here Greengrass wows with gorgeous scenes of oceanic vastness and crisp, taut editing; and Hanks, on his game, conjures up a thespian tempest. But without the charts and logs, it never becomes more than the spectacle du jour on the high seas.