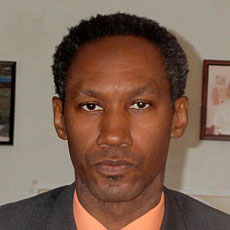 A native of Philadelphia, Ron Peden, 53, arrived in Cambridge 15 years ago to attend graduate school. He holds a bachelor’s degrees in business administration and a Juris Doctor. He is the author of “Notes on the State of America: Black to the Future, or White from the Past?” which he released in 2008 through the company he runs in Cambridge, OAU Publishing, and its related website, the Organization of American Unity. He identifies himself as an activist – including in seeking reparations for U.S. slavery – and as a corporate and civic accountant and former dancer.

In a biography supplied to the Cambridge Chronicle, he said the city was underachieving as a result of the council being “somewhat dysfunctional from a conflict existing in some members between self-interest and community interest, causing the city to suffer a crisis of leadership.”

He lives in the Mount Auburn/Fresh Pond area with his wife, Sheuli.

I believe these three issues are intimately related and cannot or should not be separated from one another or from the many other issues the city is tasked with addressing. For example, because of the celebrated “diversity” that is a large measure of what makes Cambridge a desirable place to live for so many people, the city has a responsibility to ensure those diverse communities and cultures are specifically and expressly contemplated and accounted for within its development and planning schemes for the future. Otherwise we end up exacerbating the current reality of a widening wealth gap and cultural divide that does not account adequately for the assimilation and economic mobility of our diverse communities.

Social equality initiatives may also tend to inspire greater youth development, particularly among disaffected members of minority groups who feel they do not in fact have a meaningful stake in the city’s planning and development. This can in turn lead to a rise in levels of educational performance and civic engagement that consequently raise quality of life standards citywide. Greater economic mobility can also make city housing more accessible to residents for whom stable housing was kept beyond their reach due to limited means.

Peden on the issues