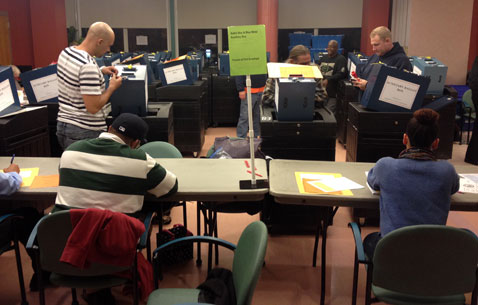 The new councillors are expected to be Dennis Benzan, Dennis Carlone, Nadeem Mazen and Marc McGovern, according to preliminary results reported at 10:50 p.m. Tuesday by election commissioner Ethridge King. They will join the reelected Leland Cheung – the top vote-getter for the second election in a row with 2,317 No. 1 votes counted – and Craig Kelley, David Maher, Denise Simmons and Tim Toomey in the new year.

It would mean having only one woman on the council, and the loss of incumbents Ken Reeves and Minka vanBeuzekom from the council.

VanBeuzekom was elected just two years ago after several years of neighborhood activism on environmental issues and in seeking solutions in such literally street-level problems as waste disposal and rat removal. But Reeves is a longtime councillors. He was elected in 1989 and ties with Toomey for longest time on the council. He also was mayor three times in his 24-year service, from 1992-95 and in the 2006-07 term.

Cheung said he was sorry to see his colleague off the council, and departing councillor Marjorie Decker tweeted after hearing results “to thank Ken Reeves for his vision, leadership and love for the children and people of Cambridge.”

“There is another chapter of greatness coming,” she said.

In fact, the 710 “auxiliary” ballots to be counted by hand in the coming hours may change council results. There are 1,673 for the School Committee, but they are less likely to change the outcome of School Committee results, political experts said late Tuesday. Most are expected to be blank.

The new School Committee members are expected to be Fran Cronin and Kathleen Kelly. They will join the reelected Fred Fantini, Richard Harding, Patty Nolan and Mervan Osborne in the new year.

These votes are considered preliminary, with the count becoming official Nov. 15.

Recent elections had seen single-person turnover, with Cheung taking a council seat in 2009 while Larry Ward lost his, then vanBeuzekom taking a seat two years ago as Sam Seidel lost his. On the School Committee, Nancy Tauber got on in 2009 as Joe Grassi left, and two years ago Osborne got on while Tauber left.

This election was bound to be different: Each elected body was losing two members, with Decker quitting the council to focus on being state representative and Mayor Henrietta Davis opting not to run again, like Alice Turkel on the committee side. McGovern ran for council instead of reelection.

There was also a surge in council candidates, to 18 challengers in addition to the seven incumbents running. That doubled the number of challengers from the last election in a term that saw conflict over the direction of city development, a rebuke from the state over a violation of its open meeting law, flouted promises and neglected issues and significant council dysfunction, including regular bouts of squabbling at Monday council meetings.

Carlone, Mazen and challenger Janneke House joined forces in the first political slate the city has seen in a decade, but House’s fortunes didn’t seem lifted significantly by it.

Benzan, the first Latino on the council, got the most No. 1 votes among challengers – 1,258. Luis Vasquez, 25, would have been the youngest councillor ever elected, but earned too few No. 1 votes for the honor.

“I used to say this was a one-time deal,” Vasquez said during a pre-results CCTV interview with politics watcher Robert Winters and Susana Segat. “I’m considering giving it another shot.” 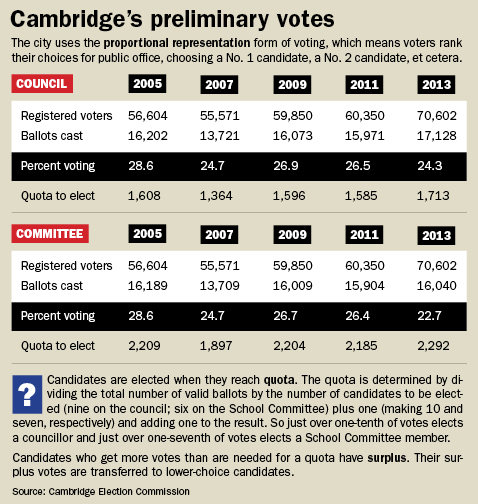 There was one way the results were a repeat of two years ago: By looking at the incumbents who got enough No. 1 votes to achieve or beat the “quota” of No. 1 votes. This year, based on the number of ballots and candidates, the council quota was 1,713. Last election it was 1,585.

At that time, Cheung was the top choice of 1,974 voters; Toomey had 1,654 top votes at the time; and Maher had 1,636 top votes. In this election, Cheung actually improved on his surplus votes, meaning the number of No. 1 votes he got exceeding quota. Two years ago he had 389 more votes than he needed to reach quota, or 20 percent more; this year as quota decreased he had 694 more than he needed, or 26 percent over quota.

Nolan got 3,794 top votes from the 16,040 ballots counted Tuesday, putting her 1,502 votes over the committee quota of 2,292 – that’s 40 percent over quota, or even better than Cheung’s result, and Nolan was ecstatic upon hearing the results. Her ebullience matched the feathered boa she wore around the Citywide Senior Center, where the Election Commission had set up camp to count and release results.

Polls were open from 7 a.m. to 8 p.m. Tuesday, with poll workers reporting a steady trickle of voters, no more or less impressive than recent municipal elections. Although the electorate looks large at 70,602 registered voters, it’s very likely swollen artificially by a quirk of law unique to years such as this one, when there are many elections, Lesley Waxman, assistant director of the city’s Election Commission explained Monday. There was no point this when the commission could purge voters who haven’t voted in the past two federal election cycles – and are probably no longer living in the city.

So while the percent of active voters this year looks lower than usual at 24.3 percent – lower even than record lows of 2007 – the 17,128 ballots cast in the commission’s preliminary count is actually better than recent city elections: 15,971 for council two years ago and 16,073 four years ago.