Judging and debating stray marks, mystifying scribbled directions and arrows and even a dollar sign painstakingly rendered in voting-sheet bubbles, election commissioners sorted through 2,386 auxiliary ballots Wednesday toward pinning down final election figures and seeing if these hand-counted votes would change who made it onto the City Council and School Committee for the next two years.

After 11 hours of work, all that happened on the School Committee side is that reelected incumbent Richard Harding fell out of those who reached “quota” – enough No. 1 votes on Cambridge’s ranked ballots to be elected in the first count. On the council side, the number of ballots transferring from candidate to candidate in Cambridge’s proportional representation form of voting narrowed from Tuesday’s 15 votes between challenger Nadeem Mazen and incumbent Minka vanBeuzekom to six at about 8:20 p.m. Wednesday.

While there are still overseas ballots to account for until the results becomes official Nov. 15, it looks as though first-termer vanBeuzekom will join 24-year councillor Ken Reeves in being unseated in the coming term.

While vanBeuzekom – an experienced neighborhood activist before election in 2011 – considered herself in recount territory, she also imagined life after the council long enough Wednesday to say she would stay active in civic life.

Cheung picked up 72 top votes from auxiliary ballots, putting him at 2,389 and keeping him an impressive 26 percent over quota. Nolan was the other big winner in terms of No. 1 votes, gaining 125 to land at 3,919 – putting her an impressive 1,060 top votes ahead of the committee’s éminence grise, Fantini.

Nolan said she was surprised Tuesday upon being asked if the extraordinary number of top votes gave her a legislative mandate in the coming two years. To her colleague’s possible dismay, she said, that may be exactly the right interpretation.

“That’s what made me happiest, that there were a lot of voters out there whose votes meant they liked my insistence on data and on taking a stand on issues,” Nolan said. “I think that’s what got me reelected.”

Not being a Cambridge native – her speeches at candidates forums traditionally begin with a half-joking apology for being a resident for a mere two decades – she said the vote meant “people voted for me based on my work.”

Votes for candidate rose proportionately as election officials worked their way through results from Cambridge’s 11 wards and their 34 precincts, resulting in only two minor swaps in the ranking of candidates by No. 1 votes: Elie Yarden gained three top votes from auxiliary ballots to wind up at 102, moving below Gary Mello because he gained nine votes and wound up at 107. With Toomey getting 40 additional top votes off auxiliary ballots and Maher getting 77, Toomey moved below Maher in sheer amount of No. 1 votes. 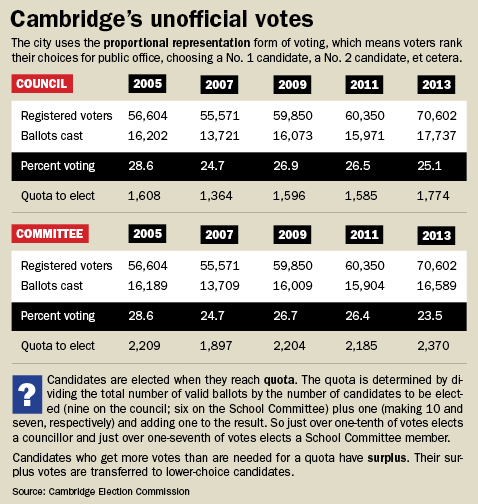 That didn’t disguise an election trend they may have to address if they run again in two years: Despite this election bringing 1,766 more people to the polls over the 2011 turnout, both councillors missed quota and lost top votes numbering in the triple digits. Toomey went from 1,705 top votes two years ago to 1,457 this year, a drop of 248, while Maher went from 1,686 to 1,464, a drop of 222.

By comparison, Cheung got 2,017 top votes two years ago but climbed to 2,389 this year, despite the number of challenger candidates doubling to 18 from nine in the last election. 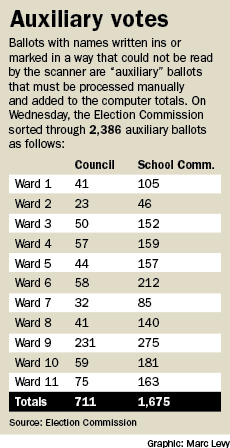 There were 711 auxiliary ballots for the council and 1,675 for the School Committee that election officials had to work through Wednesday, opting to finish all 11 wards even though they had three to go (including the biggest) at the end of traditional workday hours. Still, they were working out of space in the Citywide Senior Center in Central Square – and said they didn’t have rights to the room Thursday. The commissioners kept plugging away and finished judging the last ballot at 7:22 p.m.

The most problematic ward was the ninth, a sprawling territory around Fresh Pond in Cambridge’s southwest corner, where a ballot scanner’s memory card in its Third Precinct failed early Election Day.

“Nine-three is one of those wards with a school, so it means a lot of balloting,” partially from parents who vote when picking up or dropping off their kids, election commissioner Polyxane Cobb said. “On a normal Election Day, you can get 500 voters in the first one and a half hours.”

Despite the slowdown, election officials said they were improving on their count times from previous elections.

This post was updated Nov. 15, 2013, with a new alphabetical results graphic showing the correct vote count for Elie Yarden.