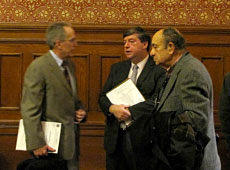 Lawyers for City Council candidates talk in City Hall, where the Election Commission announced decisions for a recount starting today.

Although the election season lingers on with a City Council recount starting today at at the Willis Moore Youth Center in the Riverside neighborhood – and expected to go for the next two weeks – council candidates have filed their final campaign finance reports, and things look a little different than in mid-November.

Some candidates poured on the spending in the final days of campaigning, with incumbent David Maher’s spending surging the most: $18,055 from the report filed at the end of October to the one filed after the final days of the race leading to the Nov. 5 vote. That was 32 percent of Maher’s total spending and presumably helped him get elected, but he missed quota and lost No. 1 votes numbering in the triple digits from the previous election despite there being 1,772 more ballots cast this year.

The next highest in late spending surges was Jefferson Smith, a challenger who bumped up spending $11,283 at the end, representing 37 percent of his total spend, but didn’t get elected. Among the biggest proportionate increases was incumbent Craig Kelly – he went from spending $6,171 for the bulk of his campaign, dumped $5,579 into it at the end (47 percent of his campaign money) and came out a winner.

With his own surge in late spending, $779 that reflected 20 percent of his total, challenger Gregg Moree stayed the candidate who spent the most per No. 1 vote: $101.70, whereas before the final push it looked as though he was spending $81.18 per vote. The next highest candidates are significantly lower. Longtime incumbent Ken Reeves, whose $63,316 was the most expensive campaign this year, essentially spent $67.79 per top vote. Challenger Mushtaque Mirza spent $66.40; Smith spent $52.77; and rounding out the top five is council winner Dennis Benzan, who spent $56,393 on his campaign, or $43.35 per top vote. He also raised the most money in this calendar year. 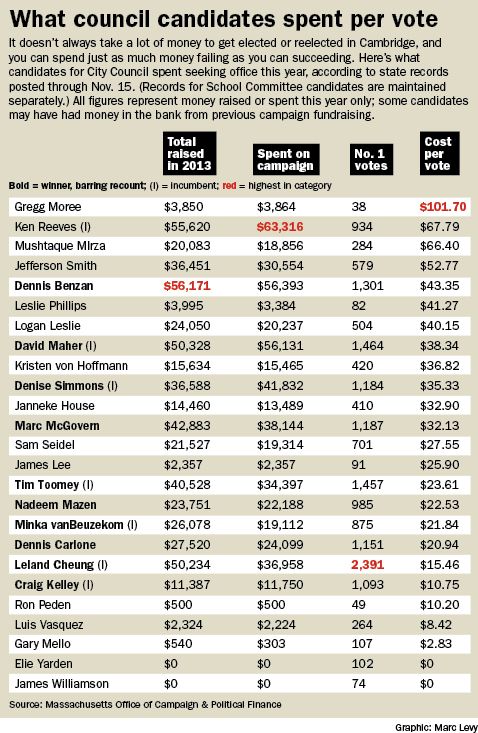 For the candidates involved in the recount, amounts are clustered, with winning challengers Dennis Carlone spending $20.94 and Nadeem Mazen spending $22.53 campaigning for each top vote, respectively, and incumbent Minka vanBeuzekom – who petitioned for the recount that makes Carlone and Mazen the most vulnerable – between them at $21.84 per top vote.

Carlone and vanBeuzekom have been fundraising again to pay for recount expenses, including lawyers.

The incumbent has retained Dennis Newman, fresh from the Lawrence and Amesbury recounts, and Haskell Kassler, who, while known for his experience at recounts, probably isn’t as well known as Newman: He was lead counsel for Al Gore campaign in Palm Beach County during the Florida recount, cited by The New York Times as “overseeing the manual recount” against the George W. Bush campaign in 2000.

Carlone is represented by Peter Sturges, who has served as executive director of the state Ethics Commission and is a former Cambridge election commissioner.

Local political expert Robert Winters looked at the recount Tuesday on his “Cambridge: InsideOut” show on Cambridge Community Television and suggested it would not change who was elected.

“In fact the actual gap between candidates may actually grow a little bit, and this is ultimately the expected outcome,” Winters said.