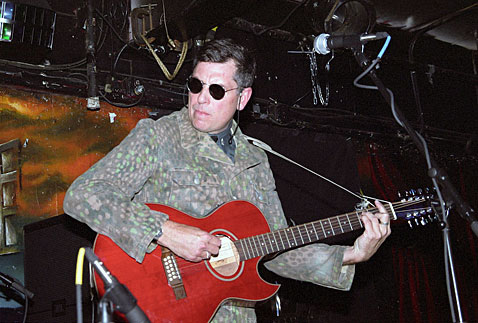 Death in June performs at ManRay in April 2005, about three months before the nightclub closed. (Photo: digitalilluminations)

Mark up another failed ManRay revival, and make way for a Central Square pet store.

The legendary goth fetish nightclub, closed in July 2005 to make way for an apartment building, was to move into Central Square’s former Blockbuster video space at 541 Massachusetts Ave. – less than a tenth of a mile from the old location at 21 Brookline St.

But that site is due for a Board of Zoning Appeal hearing Dec. 19 for a very different purpose: a pet store.

ManRay owner Don Holland won the right to keep his restaurant and alcohol license in January by telling the city’s License Commission that he had plans to take over the Central Square space. The announcement was greeted with some skepticism by the commissioners, arriving as it did just in time to save the license they were looking to take away.

He said he “wasn’t at liberty to talk” about the license or plans.

Holland has explored options with nearly every landlord in Central Square, by the description of his attorney, James Rafferty, including hoping to reopen on the second and third floor of The Barron Building; the current site of the Harvest Coop; at what is now the Central Square Theater, where he was a finalist for the space; in 2009 at the Green Street Grille; and in 2010 on Green Street across from the former police station. Even the Blockbuster site took months of negotiation, and landlord Morris Naggar of 3MJ Realty was called “lukewarm” by Rafferty on bringing in a nightclub to his 5,000-square-foot space at 541 Massachusetts Ave.