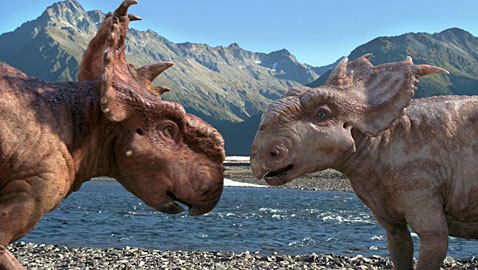 “Walking with Dinosaurs” is an alluring mashup, a cinematic Frankenstein, if you will, that engrosses with vigor as it dispels with inanity. The project itself is a hodgepodge of odds and ends, produced by the BBC Earth team that created the similarly named documentary series that aired on U.S. educational outlets such as National Geographic and the Discovery Channel. The film, which cost north of $80 million, almost didn’t get made, as studio problems threatened to kill the funding, but aggressive ticket pre-sales carried it through. How great is that – a film that has paid for itself before even hitting the theater? And that’s probably why we’ve been seeing the trailers for it since midsummer. 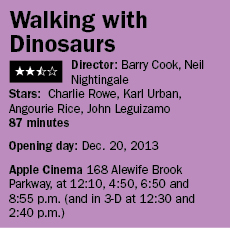 The visual craftsmanship is a wonderment almost on the level of “Gravity.” The blend of live backgrounds filmed in Alaska and New Zealand (where everything Tolkien is shot) and computer-generated dinosaurs woven in later is seamless and about as real as you’ve seen a dino rendered – up there with the “Jurassic Park” films. The directing tandem of Barry Cook, who was one of the directors on “Mulan,” and Neil Nightingale, who comes from the BBC side of the house, bring diverse and complementary skills, but like “Gravity,” FX wizardry and a keen artistic eye don’t earn you a pass on story.

To move from an educational platform to something that would hit the “family oriented” entertainment market (those ticket sales again), BBC Earth layered in cutesy animal voices and personas. The writer of the film, John Collee, happens to be an expert at such commercially aimed cinematic thuggery. He transmuted “March of the Penguins” into “Happy Feet” and he’s on par here. The awkward plot wrapper has a modern-day family out on a paleontological expedition (Karl Urban, ill-fitting as the Indiana Jones uncle) when the doubting Thomas of the group (a generically generic Charlie Rowe) is sent back in time via a whimsical daydream trigged by a molted old crow and a petrified dinosaur tooth (don’t ask).

Back in the late Cretaceous period we hang out with a herd of Pachyrhinosaurus (basically Triceratops minus the horns). The runt of the patriarch’s new litter, Patchi (voiced by Justin Long, the Apple guy in those Mac vs. PC commercials) can’t get a bite to eat from his chest-beating older brother, Scowler (Skyler Stone) and is subsequently stolen as snack food by a stealthy raptor. Obviously the hero of the yarn survives, but he’s left with a hole in his frill – think of Nemo and his lucky fin and, like Nemo, it’s during the seasonal migrations that he also loses his parents to a pack of Gorgosauruses (a smaller, slimmed-down T-Rex competing for the Olympics) who lie like the hungry crocodiles of the Nile in NatGeo documentaries waiting for wildebeest and zebra to jump into their waiting jaws.

To give it context, the prehistoric flashback is narrated by the big ugly crow, who back in the Cretaceous is an even uglier bird with big teeth and mottled plumage. Known as Alex, the attention-challenged Alexornis (now you know how they cooked up the name) possesses a rangy sense of humor, so it’s a good thing he’s voiced by John Leguizamo, the biggest name in the cast. Along the way to maturity, Patchi has many misadventures. Clearly, as an undersized dino-rhino, he’s not going to win the alpha position by head-butting a rival into submission, but then the call of nature (a feminine herd mate) in the form of the nubile Juniper (Tiya Sircar) changes all that and comes between the brothers.

The shrill voiceovers detract annoyingly from the quality of the visuals. There’s some punny good lines such as “Think outside the nest,” and the future-knowing Alex serves up a telling quip about a lake becoming an oil field, but the fart jokes and dino-powered poop shower miss meteorwide, as does the Barry White song cued up when Patchi first sees Juniper. Beside the use of Fleetwood Mac’s “Tusk” for a herd of marching herbivores, all the implementations of music are awkward, inappropriate and poorly synched.

The film’s pretty violent, too. There are dozens of deaths, though they are sanitized and mostly offscreen. The company that made the fantastic sea-plumbing documentary “Deep Blue” clearly wants to keep it real while making something family friendly. The attempts to layer in educational facts about the dinos and the past are well-intentioned but a bit random and ill-conceived. If there’s a lesson to be learned (beyond that every fossil tells a story) it’s that it’s hard to be real and score mass appeal. See it in 3-D.