CVS should prevent its carts from leaving its parking lot, and the city can play a role 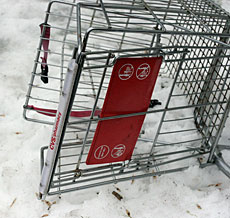 CVS should prevent its carts from leaving its parking lot, and the city can play a role

In spite of the efforts of city councillor Leland Cheung and the Cambridge Police Department’s community services unit, CVS is the only merchant in Porter Square unwilling to cooperate in the removal of its abandoned and unsecured shopping carts.

On Saturday evening at 5:30 I saw my blind neighbor fall as he tried to navigate the Lancaster Street snow and the sidewalk. Two CVS shopping carts, one filled with trash, obstructed his path. (I am an 83-year-old woman, but was able to lift the carts and stick them into the snow.) He recovered his footing. But these carts have been there for three weeks, in spite of many calls and efforts to have them removed. (They’re still there.)

CVS is the only Porter Square merchant that does not employ an automatic lock on their carts. There have been numerous unsuccessful efforts to secure their cooperation in keeping their property on their premises. Maybe some community attention can bring pressure on them to do so. And hopefully, the city will pass an ordinance to prevent sidewalk obstruction by seizing the carts and fining owners and/or cart thieves.