‘The Nut Job’: An animated film noir with gangsters, ‘Gangnam Style’ is a mixed bag 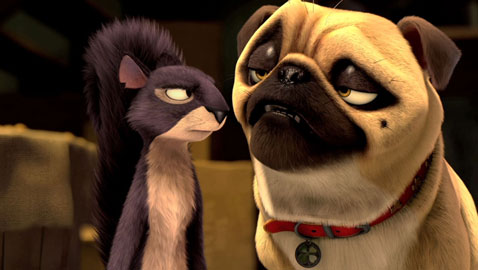 ‘The Nut Job’: An animated film noir with gangsters, ‘Gangnam Style’ is a mixed bag

Who knew that in the city parks across America, all the furry vermin who scuttle, forage and burrow exist in a grand interlocked society built around the process of collecting a communal hoard for hibernation season? As nutty as that might sound (or not), it’s the crux of Peter Lepeniotis’ richly animated misadventure with shades of “The Wind and the Willows” if funneled through a rigorous round of urban planning. 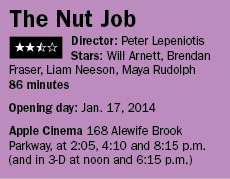 Much salt and seasoning is added to the archetypal recipe and, as a result, “The Nut Job” is an energetic, yet mixed bag. The impressive 3-D effect adds subtle, enriching depth, and the parallel human story about a bunch of no-neck thugs and their pet pug trying to pull off a bank heist is done with an odd noirish flair. I’m pretty sure that anyone one in the film’s target market of 4 to 10 years old has no idea who Jimmy Cagney was or what a noir is and will be totally wigged out by the vintage cop cars and milk wagons zipping about. Sure, that thing worked with Bugs Bunny and Looney Tunes, but their heyday overlapped that of American film noir.

The other major bump to “The Nut Job” is that its protagonist, Surly the squirrel (voiced by Will Arnett), is a self-centered outlier who tries to spin everything to his advantage without contributing to the bigger social good. His main concern is his cut of the nut pile, and while he’s meant to be a heroic rogue in the mold of Eastwood’s Man with No Name or Mad Max, in this kiddie fare the complexity of such an enigmatic and dark persona gets lost in the family-friendly rating and antic-heavy shell game. The good news is that there’s nothing but up potential for Surly.

That is, until he accidentally (via a propane-propelled nut cart) firebombs Liberty Park’s winter stash inside a big oak tree and gets banished to the dingy alleyways of the unforgiving city. He’s got a few supporters in Andie (Katherine Heigl), the fox-colored squirrel with a fiery temperament and love interest potential, and Buddy, a dumb but sweet rat, proving again (beyond “A Rat’s Tail” and “Ratatouille”) that the detested carrier of the plague can in fact endear on screen.

It’s in the urban wilds that Surly stumbles upon a nut shop that also happens to be the front for the bank caper, since it’s next to the desired vault (tunnel under, blow the door and grab the loot). With such tree-fallen riches in sight, Surly and Buddy plan their own operation (thus the title, wink, wink) and the two larcenous-minded factions begin to step on each other’s toes with increased adversarial intensity. Throw in Precious (Maya Rudolph), the tail-twerking pug assigned to rid the robbers of their furball nemeses (yet instantaneously subservient to the holder of a shiny high-pitched dog whistle) and Raccoon (Liam Neeson), the gruff leader of Liberty Park with many agendas in play and an Angry Bird (big head, little body and a nasty peck) on his shoulder, and much circumvolution ensues in comedic darts that hold just enough value for both sides of the family viewing equation. (The violence is cartoonish enough to be considered relatively benign).

Lepeniotis, who has a long resume in animation dating back to the “Toy Story” franchise, here gets his first full-bore opportunity to helm a feature. The romp, an expansion of the director’s 2005 short “Surly Squirrel,” is tagged as a Canadian-South Korean co-production, which may explain the injection of Psy’s “Gangnam Style” into one scene. Think about that for a moment: a ’40s-styled crime caper teeming with rodents that’s scored to K-pop. It also adds texture to Psy’s recent stint shilling pistachios on TV.

As far as “nut jobs” go, you still can’t top Scrat’s ageless quest for that elusive acorn in the “Ice Age” series. He’s an indelible character expressing all through nervous tics, squeaks and those big bug eyes. Surly, on the other hand, is one of the least likable critters in the vast potpourri of pawed personalities in “The Nut Job.” Even Grayson (Brendan Fraser), the vacuous Dudley Do-Right squirrel of Liberty Park, garners more genuine empathy. No matter, Lepeniotis demonstrates deep artistic vision and a deft hand at pacing. It will be interesting to see what he does next. Be sure to stick around for the end credits, when Psy gets an animated sendup.