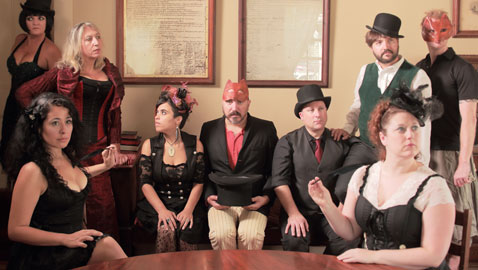 What Time Is It, Mr. Fox? and Erich Haygun combine forces Friday for an evening of “queerformance” at Club Passim.

Led by the gender-defying voice of 3rian King, What Time Is It, Mr. Fox? blends smoky cabaret with folk noir and classic soul, sounding something like a circus dream about Tom Waits and Annie Lennox. The band also features Nathan Cohen on violin and trumpet, Mike Leggio on upright bass, Lori Perkins on hammond organ, Dennis Monagle on drums and Shana Cahill and Liz Bean on backing vocals.  In addition to singing songs about sex, love, religion and identity, King likes to deliver incisive monologues while dressed as a clown, witch, circus ringleader or vagabond. Adam Feldman of Time Out New York advises, “catch him as his star rises.”

Erich Haygun is a spoken word artist who has represented Boston, Providence, R.I., and Canada’s Vancouver at international poetry competitions and has toured throughout North America and Europe. His work has been called “tender, yet violent” by The Boston Globe, combining deadly serious social commentary with a flair for unpredictable live performances.