‘Tim’s Vermeer’: 2,000 days later, inventor paints his way out of a reproduced corner 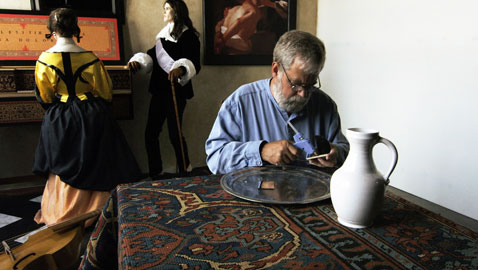 ‘Tim’s Vermeer’: 2,000 days later, inventor paints his way out of a reproduced corner

During a casual conversation with his pals Penn and Teller (yes, the performance comedy team that performs droll acts of sleight of hand), Tim Jenison tossed out the idea that the great 17th century painter Johannes Vermeer might have generated his masterworks via a controlled methodology – that could conceivably be replicated – and not sheer artistic eye and a deft free hand. Given the movie’s being, that conversation obviously budded into a dare and/or a personal obsession. 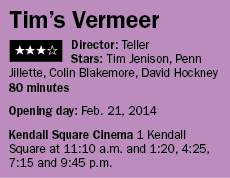 Jenison, a quiet, pontificating soul and an inventor by trade who made his nut in video software, possesses a bulldog tenacity and keen acumen. He’s the kind of guy who sees a problem and goes off and tinkers until he can remedy it with a working solution. His intriguing theory is that Vermeer used a process called “camera obscura” (the projection of a lighted image through a hole in a box or a room to create a smaller inverted rendering on the opposing surface outside the container) as an on-canvas guide (think of tracing in its most complex form) for his creations. The centuries-old technique, now largely a schoolroom experiment, became the foundation for the modern camera and moving pictures. Vermeer, if he employed it, didn’t have any well-oiled machinery or electricity, just light and a hole.

The notion that the revered artist may have used such a mechanical and stepwise process as a “cheat” must be unsettling to those who have adored the Dutch master’s works (which have often been proclaimed as if “painted with light” because of their uncanny sense of illumination and depth) but Jenison, ever committed to his argument, remains mindful and deferential to the painter and his place in history.

Jenison, it must be noted, has never painted, let alone had any formal training. In an early, preliminary stab, he engages the slow, tedious process (reinverting the image with a mirror) to paint a portrait of a family member from an old black-and-white. The result is stunning, almost too real to be believed. And so, to prove the theory on the master level, Jenison sets his sights on replicating the great’s “The Music Lesson” – not from the painting itself or a copy, but a full recreation of the room Vermeer used as his subject.

That’s when things get interesting. You can’t just borrow 17th century furniture from museums, and replicas won’t do; Jenison wants every detail to be spot on. So what does he do? He builds the furniture by hand, cutting a lathe in half and retrofitting it so he can make the furniture pieces to the exact scale Vermeer had in his studio.

Even beyond that it’s daunting how far Jenison goes and the resources he must have at hand to remain fully engaged is such a monumental undertaking. The time from that initial “conversation” to the film’s concluding scene is almost 2,000 days, and during that time ostensibly all Jenison does is pursue his Vermeer.

The long-cooking documentary, directed by Teller, is pretty straight-ahead in its approach and effective, but given the director’s alternative trade you’d expect a little more brevity. Jenison himself is pretty stiff, sort of the uncle every kid avoids at family gatherings – until he breaks out the jet-propelled roller-skate pack (which he really did concoct) and becomes the new wow of future flockings. The film’s greatest moment of whimsy comes when Jenison, Penn and Teller try to get a firsthand look at Vermeer’s masterpiece, which hangs in Buckingham Palace. After initial denials,  the three stage a mini Occupy operation until Jenison gets his 30 minutes with the object of his desire.

Actor Martin Mull and renowned painter David Hockney chime in to attest to the quality and process. The scenes of watching paint dry and laying down minute details slowly over days viscerally captures the arduousness of the long haul physically and mentally on Jenison, who during the whole endeavor maintains a steadfast, scientific approach. Deft and thorough in its ability to inform and educate, “Tim’s Vermeer” does so with tart nuggets of awe littered throughout. I’m not sure there’s another documentary out there that has captured such a protracted and labor-intensive process in such a complete and entertaining fashion. “Vermeer” isn’t an uplifting experience per se, but a reflective and profound one that should have viewers thinking outside the box.