‘Words and Pictures’: Paint by numbers, except for vibrant author-artist love story 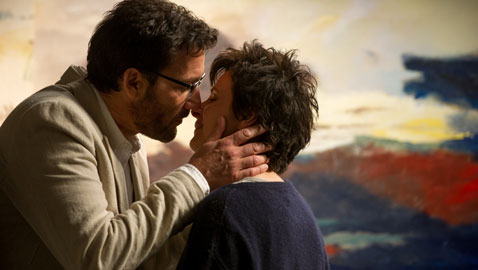 ‘Words and Pictures’: Paint by numbers, except for vibrant author-artist love story

“O Captain! My Captain!,” the famous opener from the Walt Whitman poem about Abraham Lincoln that got good replay in “Dead Poets Society,” gets another retooling in “Words and Pictures” as a jocular form of connection between an embattled instructor and a class clown. Unfortunately the reuse doesn’t carry as much gravitas as it did in Peter Weir’s 1989 bittersweet boarding school saga, but “Words and Pictures” does bear fruit – just comes from different stems, most notably the crisp performances by the able leads and an intermittently sharp script that clearly had some thought put into it. 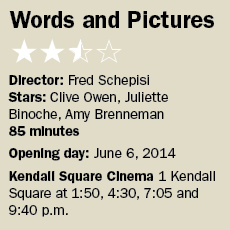 The mechanics, however, are fairly by the numbers. Jack Marcus (Clive Owen), aka Mr. Mark, is a has-been literary star who’s fallen into drink and a dearth of creative muster and milks an English teaching gig at an elite prep school in Maine to keep his toe in the water. He’s also in a bit of hot water with the school’s administration because of a drunken incident at the nearby fine dining establishment and his slack, unconventional classroom demeanor, which sits well only with his restless students. Jack’s pretty much at the tipping point; the tired-of-it-all board has him slated for review and it doesn’t help any that the literary magazine he oversees has become a lackluster money pit.

Enter Dina Delsanto (the ever alluring Juliette Binoche), a New York artist with a capital A. She’s shown in Soho and built a reputation earning her the moniker “the Icicle.” Why not “the Ice Queen” or “Frigid Fresco,” or something more to the point, I’m not sure, but it does aptly illuminate the oft uninspired eddies that litter Gerald Di Pego’s script. Dina arrives at campus to teach honors art. Like Jack, her artistic star has faded – not because of internal demons, but by a rheumatoid arthritis that has gravely impaired the use of her hands and weight-bearing joints.

In short, they’re damaged goods and natural combatants driven by frustration, ego and ghosts of the past. They’re also pretty good teachers, or so the rainbow-colored spectrum of inspired kids would indicate. The “war” gets underway when Jack engages Dina in his faculty lounge game of multisyllabic one-upmanship (I name a word with six syllables, can you come up with one with seven or more?). Dina’s more sporting that most other faculty members, who view the game as an annoying means for Jack to stroke his ego.  The real call to arms comes when Dina calls words “lies” and pictures “truth.”

As the film builds, the simmering back and forth manifests into something bigger and becomes embraced by the school as a whole as an extracurricular means to explore and debate. The fate of the magazine and Jack factor in, but that’s mostly chatter compared with deeper issues. Jack can’t write and can’t connect with his son, who goes to a nearby college, while Dina struggles with pills and physical barriers that prevent her from painting (all of Dina’s art in the film is by Binoche, who’s had a long-standing passion for paint on canvas). The two sense each other’s pain and exploit it while they also begin to quietly afford the other compassion, and it’s in those moments of realization and revelation that the film begins to find its pulse.

Di Pego, whose credits include “Message in a Bottle” and “Phenomenon,” gives Owens and Binoche some superbly crafted lines – especially Owen, who delivers them with all the savor and vehemence of a young Richard Burton. Owen nails the drunken slur, making it visceral and real and not hyperbolic, as it might otherwise have been played. Unfortunately for Binoche, Di Pego and director Fred Schepisi opt to illustrate Dina’s ordeal through a permanent scowl, angry huffs and knee-locked stumbles when betrayed by her cane. It doesn’t quite mesh with the other side of Dina that Binoche warmly brings to the screen: the Dina who challenges her students, the Dina who won’t give up and the Dina clearly afraid to let someone in.

Things ultimately veer toward the romantic, and pleasingly it’s the one aspect of the film that unfurls free of convention and cliché. The care and craft wrapped around it is so diligent and nuanced that it makes the other threads about the pushy preppy (Adam DiMarco) who tosses politically incorrect lines at the cute but shy Asian girl (Valerie Tian) and Jack’s impropriety with the head of the board (Amy Brennan) feel shoehorned, forced and distracting. Schepisi, who’s been in the game a long time (”Roxanne” and “A Cry in the Dark”), knows when to let his actors run with it. It’s lesson well learned and also the film’s saving grace, as Owens and Binoche rise above the hokum and put on a clinic.