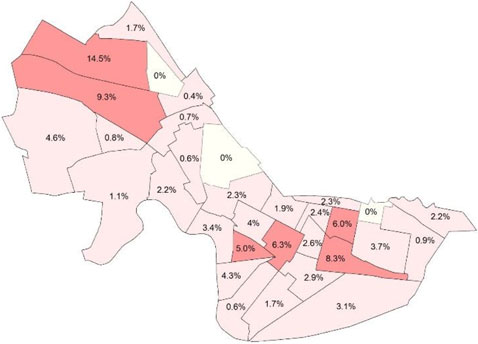 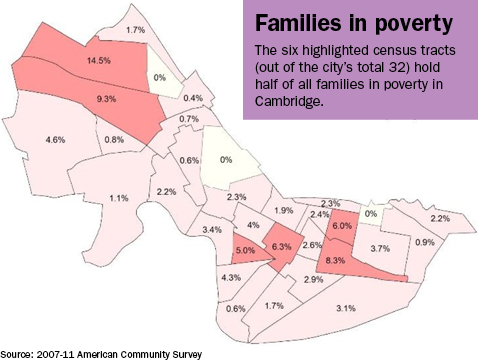 A new city assessment of community health takes the usual self-congratulatory pride in Cambridge’s diversity, services and healthy living but shines an unusual spotlight on problems such as poverty, disease, inequity and racial differences.

The 104-page report, submitted in May, was prepared to help qualify the Cambridge Public Health Department for national accreditation by the Public Health Accreditation Board. The next step is developing a community health improvement plan.

A summary of findings cited the city’s diverse racial and ethnic population, with 40 percent of residents nonwhite – the majority of those Asian. Half of residents under 18 were nonwhite, and 30 percent of people of all ages spoke a language other than English at home. Residents who filled out a survey or were interviewed in focus groups regarded diversity “as a strength of the community,” the report said.

Income diversity wasn’t matched by geographic diversity. Using U.S. Census data and maps prepared by the city’s Community Development Department, the report said half of all families with incomes under the poverty level lived in six census tracts in North Cambridge, Area IV, East Cambridge and Cambridge Highlands, the area bordering Belmont – neighborhoods that contain many of the city’s public housing developments.

Four of those six tracts contained more than half of the city’s single-parent families in poverty. Cambridge has a total of 32 census tracts.

Black residents were far more likely to live in poverty than white residents: about 31 percent versus 10 percent, the report said. The level of poverty for blacks as well as whites in Cambridge was higher than statewide figures.

Twenty-nine percent of residents were born abroad, compared with about 20 percent in the county and 15 percent statewide.

About 73 percent of residents held a bachelor’s degree or higher, far more than the county and state.

People interviewed praised the increase in bicycle use in the city, but many also “expressed concern” about cyclists’ “disregard for traffic rules” and said more bike paths are needed. “Sharing the road” was the top safety issue for more than half of residents who filled out the questionnaire.

About 15 percent of residents were obese and 15 percent overweight. Rates among nonwhites were higher than for whites, except for Asians. Overall rates have been declining since 2009.

The report, prepared by the health department with the help of a private consultant, used statistics from the census, public schools and health agencies. In addition, more than 1,600 residents filled out a questionnaire and more than 90 were interviewed in focus groups and other settings.

The report acknowledged that the people surveyed and interviewed were not randomly selected, so their comments might not be representative of all Cambridge residents. A breakdown showed that, compared with the Cambridge population as a whole, people who answered the questionnaire were more likely to be female, black, speak English and live in Area IV, North Cambridge and Cambridgeport.

The report contained some surprises. For example, about 29 percent of Cambridge children younger than fourth grade had untreated tooth decay, with white children having lower rates than nonwhite kids. The highest proportion of decay, 35 percent, was among children whose family didn’t speak English. And Cambridge middle school and high school students were less likely to have visited a dentist in the past year than kids statewide.

In another unusual statistic, the rate of gonorrhea and syphilis cases in Cambridge – the number per 100,000 population – was higher than the statewide rate for those diseases, although it was low overall. HIV/AIDS and tuberculosis rates were also higher in Cambridge than statewide. Infant mortality in the city also exceeded the state rate, although the information in the report was for 2009.

The full report is available here.