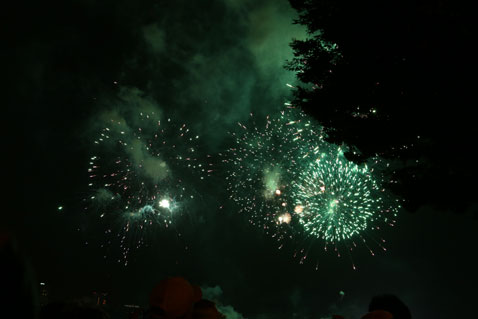 There’s no better place to watch Boston’s spectacular Fourth of July fireworks than on the banks of the Charles River, and some 200,000 people do it annually in Cambridge alone, cramming a closed-to-traffic Memorial Drive. Early birds occupy spots starting early Thursday.

But the traditional fireworks show was rescheduled to July 3 because of the Hurricane Arthur, and the 10:30 p.m. performance started 15 minutes earlier to dodge the effects of the heavy storm. Thanks to astute weather forecasters, people didn’t need to watch the whole show in rain, but attendees reported a stark difference from last year’s event: It was easy to find a grassy spot from which to watch. One visitor estimated the crowd was down by half from last year.

The fireworks lasted for about 20 minutes, and at around 10:45 p.m. – 10 minutes after the show ended – the thunderstorm came rumbling all of a sudden. Many people were caught in the rain, and the traffic was jammed.

Along with fireworks, the Boston Pops Concert began at 8 p.m., broadcast on WBZ-TV Boston. Singers and bands including “Boston Idol” winner Jilly Martin, of Chelmsford, the Boston Children’s Chorus and The Beach Boys. Pop songs such as “Let It Go” by Idina Menzel and traditional songs such as “Yankee Doodle” played as background music for the fireworks.