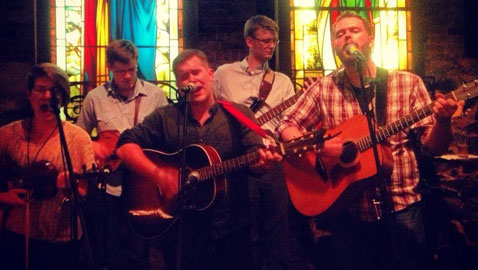 The second of four free concerts in the City of Cambridge Danehy Park Concert Series is Tuesday, featuring a performance by Cambridge/Somerville bluegrass and folk band The Surviving Kenneallys. The band – Joseph Kenneally, Brighid McHugh Mullane, Jesse Wellman, Ryan Dalley, Ian Dalley and Stephen Boyd – takes the stage at 6 p.m. at the 55-acre park, surrounded by Bay State Road and New and Sherman streets near Fresh Pond. (The formal address for the parking lot is 99 Sherman St., North Cambridge.)

The series is sponsored by the Harvard Square nightclub Passim, the City of Cambridge Department of Human Services, Cambridge Arts Council and Whole Foods Markets.

The family friendly concert series continues at 6 p.m. Aug. 5 (with ECG, or the Erik Caldarone Group, an “indie-jazz for the modern spirit” band led by a Somerville resident) and Aug. 19 (with Cat and the Moon, a five-piece Celtic- and bluegrass-influenced band). The first concert in the series was July 8 with The Blue Ribbons.

Danehy Park can be reached by the 74 or 78 bus from Harvard Square or the 83 bus from Central Square.