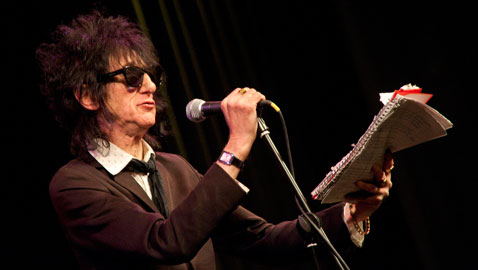 You’re forgiven for not remembering John Cooper Clarke – the godfather of punk poetry hasn’t been here since the late 1970s, after touring with the Sex Pistols – but not for ignoring his return Wednesday at the Cantab Lounge.

In a way, he has been around: Cooper Clarke is the author of “Evidently Chickentown,” the poem that plays over the final moments of the HBO Series, “The Sopranos”:

Other ways you might have encountered Cooper Clarke without knowing? The Arctic Monkeys cover his poem “I Wanna Be Yours” on the album “A.M.,” and he stars in the film “Ill Manors,” the directorial debut of top U.K. rapper Plan B (aka Ben Drew.) Their duet, “Pity The Plight” appears in the movie and on the soundtrack.

During his heyday – before being sidelined by a heroin addiction – Cooper Clarke worked and toured not just the Sex Pistols, but with the Clash, Elvis Costello, Richard Hell and Joy Division and had his own band, the Invisible Girls, in collaboration with U2 and Joy Division producer Martin Hannett. He also split off from the punk scene for a little beat time, touring with poets Allen Ginsburg and Gregory Corso.

So he’s got cred.

Central Square is one of only a half-dozen stops Cooper Clarke is making in the United States to remind the world he exists and is apparently as good as ever. (He also has a downloadable movie to promote called “Live in London,” with poems old and new, and might even have a few copies of his 1983 book of poetry, “Ten Years In An Open-Neck Shirt,” to sell.)

A lot of the smart and famous swear by Cooper Clarke. Why, British actor Steve Coogan has said, “I ask people if they’ve heard of John Cooper Clarke and if they say, ‘Yes, he’s a genius!’ I say, ‘Thank you. You’ve just saved me a lot of time” – although this would surely matter more if anyone in the United States knew who Steve Coogan was.

Also appearing Wednesday: Cambridge’s own Jade Sylvan, who is touring behind her “Kissing Oscar Wilde” and having a serious cultural moment (she’s been anointed a “risqué queer icon” by The Boston Globe, just one among many recent high points) but taking time to be featured poet Wednesday at the Cantab, her home poetry venue, for a birthday show.

John Cooper Clarke and Jade Sylvan appear Wednesday at The Cantab Lounge, 738 Massachusetts Ave., Central Square along with other poetry events. Doors for the show open at 7:15 p.m. An open mic begins at 8 p.m. and the featured poets take the stage at about 10 p.m. An open poetry slam follows. The show is 18-plus, and the cover charge is $3.