‘Strange Color of Your Body’s Tears’: High-order perversity at The Brattle 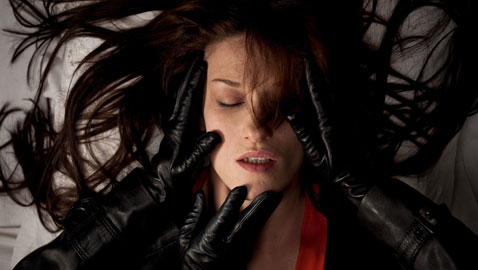 ‘Strange Color of Your Body’s Tears’: High-order perversity at The Brattle

A blade moves with sensual threat over a nipple, popping it downward; we hear the shriek of a woman; the squeal of tight leather. Then, bizarrely – the tiny, delicate hand of a porcelain doll interrupts the frame. All of this is rendered in black and white and a staccato rhythm that eerily mimics old time stop-motion, updated for a modern era. Although we are witnessing that most rote cinematic occurrence – a woman being murdered – it is conveyed in a most amazingly fresh, disconcerting way. As Bette Davis would say: “Hang on! It’s going to be a bumpy night.” A bumpy, violent, perverse one. 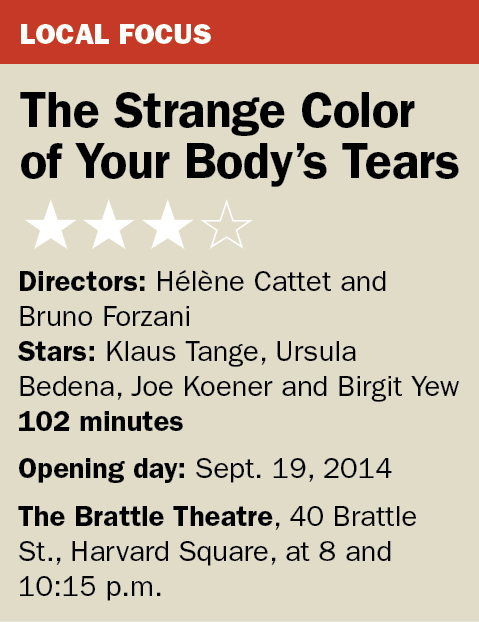 From its enigmatic title to the startling open sequence to the psycho-sexual implications of its bizarre finale, “The Strange Color of Your Body’s Tears” is the kind of shocker most critics and a smaller portion of audiences have been saddened to see all but disappear from American screens in the past three decades. Even art-house crowds will be startled by the sordid pageantry to be found here. With the arrival of this extraordinarily wild, lurid, sumptuous piece of cinema, those pining for more artistic daring in their cinema may be painfully reminded of what they may not have realized they have been missing so badly.

In an improbably ornate and wealthy apartment building in France, where all the residents seem to be top-notch home designers as well as odd eccentrics harboring dark secrets, Dan (Klaus Tange) returns from a business trip to find his beautiful wife has disappeared. Following a cursory police inquiry, Dan undertakes some homemade detective work that increasingly lowers himself (and the viewer) into the labyrinthine social and sexual adventures ensconced behind the walls of his neighbors – ushering us into a dizzying interplay of odder mysteries, strange clues, taunting sounds, blind walls, breathless chases, MacGuffins, paranoid alienation and an eroding line between psychedelic fantasies and the “truth.” Along the way we are treated to a virtuoso use of imagery, idiosyncratic cinematography and teasing, intricate sound design – it as if “Last Year At Marienbad” was made by Italian horror Hall of Famer Dario Argento in his prime. Time, identity, space, memory – all are rendered with a fluidity that is maddening and insightful at once, a bag of tricks allowing us to see and sense in new ways. This is a giallo updated for the most demanding and jaded sophisticate: Of course, the old standbys are there – twisting plot; graphic, creative violence; and beautiful, long legged European femme fatales (“the body’s tears” referring to both blood of vengeance and sweat of lust); but those three themes are embedded in a black fantasia that in its vicious momentum, mastery of symbolism and sheer power to disorientate would make Argento, Bava and the old masters blush (while making the new wave of French horror aesthetes proud). (The subject of Dan’s frenzied search, his wife, is, by the way, named Edwige – which could certainly serve as a nod to Edwige Fenech, the glamorous starlet of many famous giallos.)

The mélange of styles and devices on display here is a sentimental treasure trove for those familiar with the genre: the garish use of greens, blues and reds could be right out of “Suspiria”; the queasy self-conscious suspense is reminiscent of DePalma at his best as in “Dressed to Kill”; there is high-concept body horror à la early Cronenberg aplenty; even the catacomb-like nature of reality (and it turns out, the apartment building itself) hearkens all the way back to “Cabinet of Dr. Caligari.” But this is not simply a paean to or a rehash of influences: Co-directors Helene Cattet and Bruno Forzani (who collaborated on the feature “Amer” and contributed the “O for Orgasm” sequence to the extreme-horror anthology “The ABCs of Death”) are onto something with a new feel, or at least have tapped a sleeping giant for a badly needed reinvigoration. For instance, in what should go down as one of the most hilarious and frightening extended trying-to-wake-from-a-dream sequences since “American Werewolf In London,” as Dan continues hunting the killer even while asleep, it may begin to appear he is really after himself; or his subconscious is trying to wake him – knowing the killer is in his apartment; or the actual killer is trying to wake him; or he is spying on the self within him trying to wake his own body; or the killer buried in his psyche is literally trying to burst out of his own skin … or all of the above. It does get confusing – but wonderfully so. This is a story occurring simultaneously in several dimensions of space and time and consciousness. It’s a mindblower you will be cheering (or eye-rolling, or both) for its sheer audaciousness. (And your mind isn’t the only thing it wants to blow.)

Every time we adjust to the implications of a new image, a startling visual juxtaposition or innovative use of split screen, the filmmakers stun us with another creatively jolting use of cinematic materials. We remember what cinema – and only cinema – can do when deftly exploring the possibilities of itself. The medium comes to new life before its very own eyes (and ours). Central images and themes recur and play off of each other in new iterations, reappearing in different configurations as in a symphony (easy hint: be prepared to engage the conceptual link between The Eye, The Camera, The Doorway, The Vagina and The Void – and that’s just for starters). It is also a work that revels in sound as communicator of pleasure and pain – the soundtrack is filled with lush cacophony of flesh being penetrated or shredded – and the moans and shrieks effectively allow us to open up like a piqued flower to the fully nuanced sensorial power of horror or sex (or both). It becomes apparent that, despite the complications of its plot, the thing really being celebrated so effectively here is the sheer potential, intrigue and joy of film as a medium. And like all great films, from “Citizen Kane” to the oeuvre of David Lynch, at least half of this one is happening furiously in your own head. This film is designed to play with your mind in the most mischievous way, and believe me – your mind will happily, if somewhat fearfully, oblige.

“The Strange Color Of Your Body’s Tears” is not rated (ostensibly for all manner of debauchery) and has a three-night run.