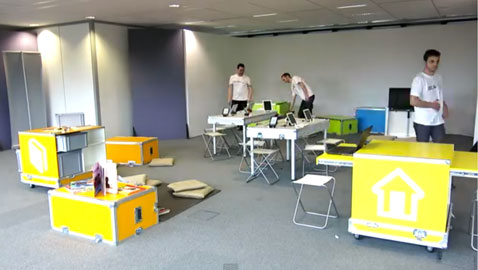 Good things come in small packages, but the Ideas Box pushes that concept to the limit: Its six sturdy trunks fit onto two pallets, stacked about as high as an average adult and weighing 1,800 pounds – but it unpacks in about 20 minutes to reveal a self-powered media and education center with 250 books and 5,000 e-books for reading on 50 e-readers; 15 tablets and four laptops, linked to satellite Internet; a movie projector, screen and 100 films; and board and video games, chairs, cushions, rubber mats and tables.

The project – designed by Philippe Starck for the French organization Libraries Without Borders and United Nations Refugee Agency – is intended to go wherever there are displaced people. The first two Ideas Boxes were sent in February to Burundi, where there are some 46,000 displaced people.

But Libraries Without Borders “also wants to see how the project works in a domestic urban environment,” such as a housing project or school disrupted by construction, said an organization project director, Harvard Kennedy School student Allister Chang.

Rolling out a box Friday at the Cambridge Community Center provides a chance to see how people interact with its technology, including preloaded Khan Academy educational software, and get feedback on how to improve it, Chang said.

With each box costing $60,000, Libraries Without Borders is looking for corporate sponsorships to keep the project spreading after a launch that relied on a $400,000 Alexander Soros Foundation grant. The organization explains:

Humanitarian crises cause urgent needs for food, shelter, health care and clothing. At the same time, refugees are deprived of information, culture, education and professional training, and they suffer from trauma, boredom and loss of hope.

The Ideas Box provides individuals and communities isolated by disaster the tools to read, write, create and communicate … the Ideas Box empowers communities to construct an informed civil society and to pave the way for a self-reliant future.

Chang is bringing the Ideas Boxes to town as part of the twice-monthly Carr Talk and Coffee gatherings of Harvard’s Carr Center community. The Ideas Box can be seen from 6 to 8 p.m. Friday at the Cambridge Community Center, 5 Callender St., in the Riverside neighborhood, for its after-school program family night.