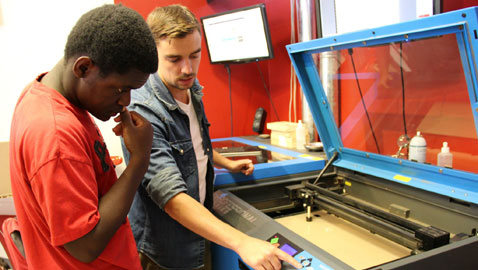 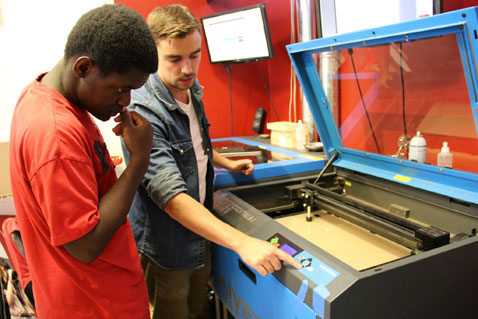 Some residents of Washington Elms, a low-income public housing development in Area IV, can see Technology Square – the heart of Cambridge’s high-tech industry – from their windows along Portland Street. Yet few, if any, have a job in that industry.

Now a partnership between the Cambridge Housing Authority and The Possible Project, a nonprofit that helps high school students learn how to start and run a business, will bring a key component of an innovation economy – a “makerspace” – to Washington Elms.

Makerspaces, places where people can collaborate and share equipment and computer software to design and make things ranging from robots to computer apps to films, are part of a growing do-it-yourself culture. They have become popular in Cambridge and other communities in the past 10 years.

Vacant storeroom “in the right spot”

The Makerspace at Washington Elms will be housed in a vacant storeroom at 107 Portland St., across the street from Technology Square, and will serve high school students who live in public housing as well as other students in The Possible Project’s programs. Equipment will include 3-D printers, a laser cutter, large-format digital printers and a spray paint station, according to the authority.

“It’s just in the right spot,” authority Executive Director Gregory Russ said, referring to the high-tech neighborhood, when the agency’s board approved a $322,000 contract to upgrade the space last month. The Possible Project will pay for most of it – $300,000 – and provide the equipment. The space is expected to open early next year.

For three years the nonprofit has served high school students, most of whom get free or reduced-price lunch and many of whom are recent immigrants or have learning difficulties. Students in the after-school program spend six semesters learning skills to start and run a business, launching their own companies or working in the group’s in-house sales and reselling ventures.

The program now operates in limited space at 955 Massachusetts Ave. Most students are referred to the program by a teacher or guidance counselor. This year, 26 participants come from Cambridge Rindge & Latin High School; 32 from the Community Charter School of Cambridge; and 32 from Prospect Hill Academy, a K-12 charter school in Somerville and Cambridge whose high school grades are housed in Cambridge.

Brenda Cross-Sanchez, a spokeswoman for the organization, didn’t know how many participants live in Cambridge public housing. She said the group and the authority will negotiate an agreement this month on services to CHA high-schoolers.

The Possible Project was started by biotech entrepreneur and venture capitalist Mark Levin and his wife Becky Levin, an executive-search firm founder, in 2010. Until this year, it was funded mostly by a Levin family foundation. In May, drug company Biogen Idec’s charitable foundation pledged $500,000 to help build and operate the new makerspace.

The Possible Project launched a Kickstarter campaign recently for $40,000 to pay for a laser cutter for the new space. As of Tuesday, 126 investors had pledged $14,773. Backers get rewards such as a five- to 10-minute “selfie video” posted on the group’s Facebook page thanking each $5 donor personally; bigger givers get Makerspace products such as two laser-etched champagne glasses for $250.