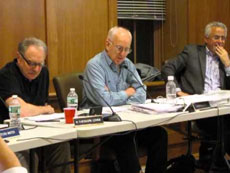 There’s plenty of work coming to change how the Planning Board acts on development – including focus groups and new members – but City Manager Richard C. Rossi had already had enough Monday after 40 minutes of discussion on the topic with the City Council.

“I’m so tired of talking about this,” Rossi said, after summing up the process he and city staff have been working on since summer, including during weekends. “We have talked about this every week, nonstop … this is not anything that I have taken lightly. Nor has staff.”

Rossi and Brian Murphy, his assistant city manager for community development, described several “interim” steps being taken to answer long-brewing but recently boiling complaints about the board’s approach to approving projects, in terms of developer dialogue with residents as well as whether a project is looked at in isolation or viewed in a larger context of density, environmental and traffic issues.

Among those steps is the eight-person board turning part of its meeting tonight over to discussion and public comment about its own procedures. That meeting takes place at 7 p.m. in the second-floor meeting room at City Hall Annex, 344 Broadway.

Considering recent actions by the board at its meetings, Rossi said members have shown since summer training sessions that “they get it too” and have already moved to put officials’ written comments and developer materials online for better public review, explain the board’s role better and give more time for discussion and deliberation by scheduling more meetings.

Five members of the board – there are six full members and two associates – are serving despite their terms having expired, but Rossi said a search for new members and interviews for reappointment have been ongoing. “I will be making recommendations for reappointments and appointments to the Planning Board for you next week, barring some catastrophe,” he told councillors.

Further, those recommendations would come after interviews with more than 20 candidates that had been influenced directly by comments from residents, whom Rossi said had “excellent” points that “really started us thinking in a different direction … We took all the criticisms, all the suggestions, we took everything, and that’s what we discussed in the interviews: ‘How would you as a citizen [and board member] think about what people are saying, what people are experiencing?’”

Rossi also vowed to make consultants more available to the board in fields such as traffic impact, urban design, soil analysis and stormwater management.

And he wanted an annual meeting of the board, Affordable Housing Trust, Board of Zoning Appeals, Historical Commission and License Commission to ensure they were “on the same page,” he said. “Too often do I see policy by the council that gets interpreted in different ways by different boards and commissions.”

For the next step in improvements, though, Rossi felt he needed to give the council a preemptive apology, “because it’s often the council’s reaction to say ‘You need to form a task force,’” he said. “I think about the notion of another task force and I get demoralized.”

He didn’t relish the thought of interviewing potential members, he said, and worried that it was hard to hear all the voices in a task force.

Instead, he planned to bring together a series of focus groups from early to mid-November with a mix of residents; developers and property owners; architects, planners, attorneys and consultants; and previous Planning Board members and staff. Meeting notes were to be compiled and used in crafting a joint session of the focus groups in mid-November, leading to a December recommendations report for the board about its processes, as well as a council roundtable. In addition to gleaning suggestions from the focus groups, Murphy said he was researching planning processes in communities around the country, from Boston to Seattle.

“If this process is one that’s going to get us to where we want to go, I think that’s fine. If it has to altered and modified, I’m willing to listen to what people have to say,” Rossi said.

But councillors seemed aboard, with Marc McGovern saying he saw the virtues of focus groups but worried about equal representation and Nadeem Mazen telling city managers that he wouldn’t ask them to apologize “for something I feel will be successful,” and that he was excited and proud of their work, despite sharing some concerns expressed earlier by members of the public.

Those members were even less certain about the approach. Nancy Ryan – although grateful to the city managers for being attentive and receptive to a long list of suggestions submitted by members of several neighborhood organizations – thought the timeline for the focus groups and roundtable was “very tight.” Lee Farris said the timeline didn’t seem “achievable or realistic” and saw residents as being outnumbered 3-to-1 by the professionals in the focus groups. Each group is to have anywhere from six to 15 people as representatives.

Being part of a group of residents that met with Rossi and Murphy as far back as May, Farris expected to see a memo to the council with concrete proposals for getting developers talking to the community rather than a sketch of how the process will begin starting next month. Development hasn’t stopped, she noted.

Farris and Ryan shared concerns than an advisory committee ordered by the council in July had simply disappeared.

The viewpoint of residents who pushed for the review – whom Rossi credited as having “raised this issue, and in a powerful way that opened a lot of eyes” – was summed up by councillor Dennis Carlone, who said the Planning Board was seen as having an approach that was “almost consistently one-sided” and weighted toward developers who wanted buildings that were out of scale in their neighborhoods.

But other councillors defended the board. Tim Toomey said the notion that the hard-working board didn’t listen to residents was a “misperception,” and Leland Cheung said the board had been treated “like a punching bag.”

“The current process has lots of room for improvement, and these steps you’re looking to take go a long way toward addressing the concerns we’ve heard,” Maher said. “I think the days of pointing fingers should be over … In a way, we have let the Planning Board hang out there, somewhat as sacrificial lambs for some of the work the council hasn’t done, quite honestly, and that the administration hasn’t done.”

Next story: Outreach to residents is key improvement, Planning Board says for itself, developers