Teachers call for help, ‘hands and hearts’ in classrooms, after relentless initiatives 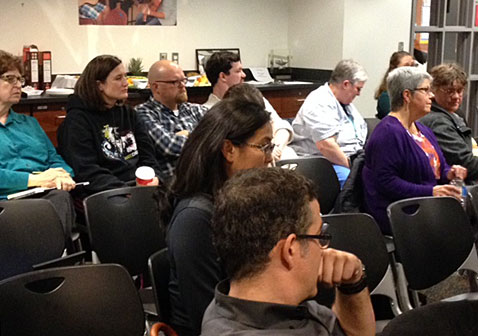 Teachers call for help, ‘hands and hearts’ in classrooms, after relentless initiatives

Teachers were invited to talk about budget priorities Tuesday, and more than 40 answered the School Committee invitation, making it very clear: They need more help in the classroom and a dramatic slowdown in the exhausting introduction of initiatives.

More paraprofessionals for “social, emotional and behavioral support,” more academic support and smaller class sizes, especially for some English immersion and special education, were constant themes. Several teachers noted an increase in the number of students needing “intense support” at all school levels. “We need some help,” said Mary Gallagher and Sheila Dillon, speaking for the staff of Graham & Parks to plead for more staff to help make “social and emotional learning a priority.” They suggested additional social workers in each school, or a “crisis team.”

The G&P teachers also noted strain on the Sheltered English Immersion program, whose K-5 years are clustered in their school. These “most vulnerable” students “should not be in larger classrooms than general education classes, as they usually are,” Dillon said. They specifically asked for an SEI cap of 18 students and for expansion to another school, noting that their building is at or beyond capacity now.

“The middle schools are really struggling,” said Lynn Brown, an eighth-grade English teacher at Cambridge Street Upper School and that school’s Cambridge Educators Association union representative. “We have so many behavioral problems stemming from several social, emotional and academic issues … that it is now difficult to get substitutes to come to our schools.”

She called staff “overwhelmingly in support of using our budget for new hires for direct service roles students” such as social workers or paraprofessionals for every grade level for every school, as well as for case load limits for special education providers.

“The district spends a lot of money on administrative positions. We need hands and hearts in the classrooms,” she said.

“I don’t think anyone has the one answer,” she said, mentioning a few possibilities: the move to a middle school model; a changed curriculum “that may not be engaging students as it should”; or broader climate change outside of the schools. Elementary and high school teachers mentioned changes in the English immersion state laws forcing students out of SEI after one year, increasing stresses for individual students and classroom climate. High school teacher Cindy Weisbart was among those urging more English-language learner supports and professional development to help the growing population of ex-SEI students.

Cambridge Rindge & Latin School special education teacher Jesse Kaplan, also the union’s vice president, noted that as the city saves money by keeping more special-education students in-district – a move he welcomed – “we are not getting enough support” in keeping their classrooms small and well-supported. He suggested more support, perhaps through co-teachers.

Others also suggested that district successes were adding to support needs. Differentiated instruction in a single classroom and Response to Intervention – an early-support program for struggling students – were named by several speakers.

Gallagher noted that G&P uses School Improvement Funds to pay for two part-time interventionists, but that was inadequate, and Tobin Montessori teacher and union representative Eva Jaffe called that a “resounding message I got from staff over and over again: We need more intervention support [and] more academic support for those below or well above grade level in all subject areas.”

Two high school teachers asked for restoration of curriculum coaches cut from the budget two years ago. Weisbart called the coaches valuable for teachers “dying to do a good job for all of our students, and all we want is more ideas,” the kind teachers get from give-and-take with mentoring coaches, she said. While thanking the committee for its involvement last year in capping class size for ninth graders to 24, she wanted high school classes even smaller – 20 or fewer students – to provide “rigorous, heterogeneous, grade-level learning.”

Even at 24 students, CRLS English teacher Tanya Trayer noted said, a dozen could need services, which would overwhelm a teacher.

Trayer also called for the shrinking and “untracking” of ninth-grade English, where honors classes look like “we are in the past” because of the lack of students of color. She read an excerpt of a student’s draft college essay, in which the writer chose a “college prep” class instead of honors solely because friends said “people I knew would be there. I wanted to be with people I felt comfortable with.”

Referring to last week’s student walkout protest of the Michael Brown grand jury decision, Trayer said, “our walkout students are tired of being sorted that way.”

Meg Maloney, fourth-grade teacher at the Haggerty School, asked that the district slow the launch of initiatives dramatically. “We know from research that system change takes five to seven years to accomplish,” she said. “Here in Cambridge, things change every year.”

“Newly purchased curricula do not close the achievement gap,” Maloney said, “engaged teachers do.” She cited the newly implemented Math in Focus as a recent example of “misguided leadership” with too little teacher buy-in and training. “Three days of training” guided by coaches “who are one step ahead” has been insufficient, she said.

“Imagine what it feels to like to be us,” she said, asking for more funding for professional development so teachers can meet and plan – and pleading, to applause, that the district “recognize initiative fatigue.”

There were several suggestions for budget items that some teachers thought might address social and academic needs:

Elaine Koury and Susan Holm, director and teacher in charge of the K-12 visual and performing arts, joined Amigos School music teacher Sharon Hamel in asking that the Kodaly music program be expanded. “I believe that this is one answer to narrowing the achievement gap,” Koury said. “We keep doing some of the same things over and over; this does something very different.” The Peabody School, where students have Kodaly classes four days a week, has seen significant MCAS score improvements, Holm said, largely crediting the program.

Several teachers schools at various grade levels were seeing increased computer demands and were not sufficiently supplied. “It is ironic,” G&P teachers said, “that we have adopted a math program dependent on interactive smart boards” just as six-year-old smart boards were beginning to break down. Amigos math teacher Ellen Davis worried about a digital divide leaving too many students without out-of-school access to computers for homework and suggested a district donation program to help.

Cambridgeport librarian Liz Speiro asked for full-time librarians, technology specialists and art and music teachers in the smaller K-5 schools that have part-time, shared teachers; and for fairer spending on library books and art supplies.

G&P teachers bemoaned their deteriorating physical plant and lack of such basics as enough chairs and desks for students.

Amigos parent Barbara Best spoke in support of an expansion of Cambridge’s student-based conflict Mediation Services program, which she said is a model program for heading off school suspensions and expulsions.

As with all hearings the session was open to the public, but with the exception of Best the afternoon belonged to teachers – some clearly nervous. Sixteen spoke, from eight schools. Along with two districtwide department heads, they expressed deep appreciation at the committee and budget subcommittee co-chairmen Mervan Osborne and Richard Harding reaching out through announcements and the staff union. “It’s wonderful that you invited us to be here,” one teacher said. “It really, really resonates with us,” another said.

This story was updated Dec. 11, 2014, to correct the spelling of Cindy Weisbart’s last name and add context to Weisbart’s comments about instructional coaching.