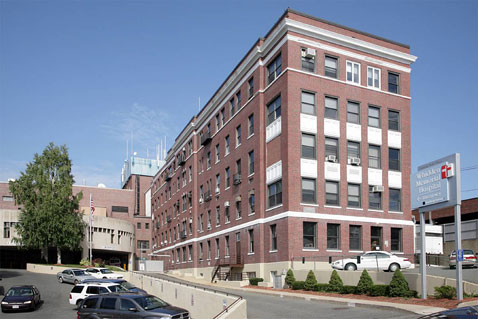 Lower-paid service and clerical workers at a unit of Cambridge Health Alliance have won a minimum starting wage of $15 an hour, their union announced Thursday. The union, 1199SEIU United Healthcare Workers East, hailed the agreement as a victory in a national campaign to raise the minimum hourly pay for low-wage workers to $15.

The union contract covers 230 employees at Whidden Memorial Hospital in Everett, one of three hospitals in the Alliance, along with Cambridge Hospital and Somerville Hospital. The workers hold positions such as certified nursing assistants, food workers, housekeeping staff, clerical employees and medical interpreters. The previous starting wage was a little higher than $13 an hour, union spokesman Jeff Hall said.

The $15-an-hour minimum takes effect July 1 and applies to current employees and new hires, Hall said. In addition, workers will get raises of at least 2 percent each year over the next three years, and a one-time $750 bonus immediately, he said.

The Fight for $15 campaign, endorsed by 1199SEIU and other unions, started with fast food workers and has spread to home care providers and retail employees. Many, especially in the fast food industry, have walked off their jobs in one-day shutdowns to bring attention to their demands and the plight of workers who don’t earn enough to support themselves or their families.

David Cecere, spokesman for the Alliance, declined to comment on specifics of the agreement  “while we have negotiations pending with some of our other unions.”  He said in general that the Alliance is “constantly looking for ways to fairly compensate our employees while ensuring that we are appropriately allocating resources to allow us to continue our critical role as a safety net hospital system.”

The health care system, which has been struggling for years to earn a profit, is the state’s second-largest provider of care to people on Medicaid and those without insurance. “Though labor costs are typically among the largest expenses for health care providers, our financial challenges are linked largely to inadequate reimbursement for key services,” Cecere said.

The last contract for the Whidden Memorial workers had expired June 30, 2013, but was extended while the Alliance and the union negotiated. Under the new contract, employees will get the $750 bonus to compensate them for the year without any raises or step increases tied to their time at the hospital, Hall said.

The new agreement also requires Alliance managers to give 30 days’ notice of any layoffs, compared with a two-week notice mandate in the previous contract, Hall said.