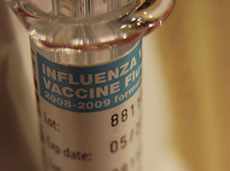 As researchers reported Thursday that this year’s flu vaccine reduces your chance of getting sick by only 23 percent so far this flu season, Cambridge Health Alliance doctors are seeing more people with influenza symptoms, a spokesman said.

“It appears that this will be a more severe flu season, similar to two years ago,” Alliance spokesman David Cecere said.

“It’s difficult to gauge the impact” this early in the season, but eight patients were in the hospital last month with “risk factors related to flu” and the number of patients with flu or flu-like symptoms has begun to rise in the emergency room, doctors’ offices and the hospital, Cecere said.

The problem that promises to make this flu season worse than others is a Type A flu virus strain, H3N2, that is causing most of the illnesses this season and did in 2012-13, Cecere and other health officials say.

That strain not only tends to cause more severe illness, but has “drifted” to a different makeup since the government designated the components of this year’s flu vaccine, scientists say. That’s probably why this year’s flu shots are so ineffective, since “more than two-thirds of circulating A(H3N2) viruses are antigenically and genetically different” from the same strain in this season’s vaccine, according to a report Thursday from the U.S. Centers for Disease Control.

Health officials still recommend that people get a flu shot, because it can help prevent serious complications if people do get influenza. But nationwide less than half of children and adults had gotten vaccinated as of early November, the CDC estimated.

This season the Public Health Department cut the number of public flu shot clinics it offered because of declining demand, senior director of public health nursing Susan Breen said. There were nine clinics last season and five this season, all in October and early November. As of Jan. 8, the department had administered 1,308 vaccine doses at clinics and other locations such as homeless shelters, compared with 1,427 at the same time last year and 1,364 in 2013.

That doesn’t mean people aren’t getting vaccinated, Breen said. Public health staff members believe more residents are going to pharmacies and doctors’ offices to get flu shots, she said. “They have so many more options now,” she said.

The health department did send nurses to public housing developments for seniors to vaccinate residents in informal sessions, but these were not large clinics open to the public like those in previous seasons, she said.

Attendance at those clinics had dwindled to the point that it wasn’t cost-effective to continue the public clinics, Breen said. Now that the clinics are over, the department is still offering flu shots at its office on Wednesdays and Thursdays by appointment.

National surveys show that physicians are the top choice for flu vaccinations, followed by pharmacies and workplaces, especially for adults. But many children get vaccinated at a “clinic, health center or other medical place,” the CDC reported.

As of early November, the federal agency said, about 35 percent of people from 18 to 64 years old had been vaccinated; 42 percent of children from 6 months to 17 years old; and 61 percent of those over 65.  Figures for the same time in 2013 were about the same, except for people from 50 to 64; more of them got vaccinated this season, but it was still less than half the population, at 43 percent.

Overall, 40 percent of children and adults over six months had received a shot, the CDC said.

In Cambridge, 58 cases of flu have been confirmed by a laboratory since Sept. 28 – not an accurate count of illness because most patients with suspected flu  “are not tested in a lab,” Cambridge Public Health Department spokeswoman Susan Feinberg said.