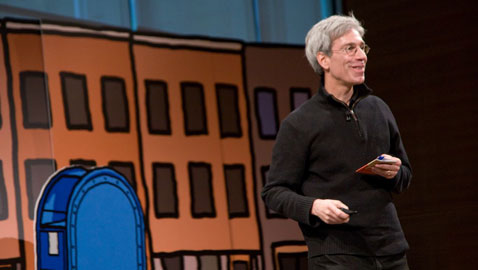 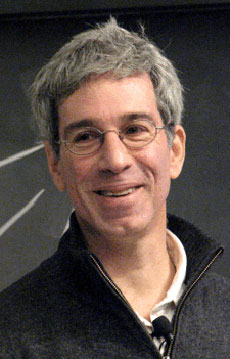 On the verge of leaving on a 12th annual international tour, Marc Abrahams and his Ig Nobel Prize have arrived on iTunes with a weekly “Improbable Research” podcast.

The prizes for research that makes people laugh turn 25 at their traditional Harvard Square show Sept. 17, having been spun off from Abrahams’ Cambridge-based Annals of Improbable Research magazine. But Abrahams has been tireless in finding new avenues to share odd findings. There’s also Improbable TV, which features short videos; an app; and the upcoming European tour features scientists who’ve studied the physics of ponytails, proven dogs like relieving themselves when aligned with Earth’s north-south geomagnetic field lines and photographed every meal they’ve eaten over 43 years.

(That Ig Nobel winner, Dr. NakaMats – at more than 3,000 patents, also considered the world’s most prolific inventor – has chosen to star in six of 10 tour stops despite being diagnosed with a terminal illness, Abrahams said, and “this is expected to be his final grand tour, on which he will reveal his research secrets and thank his many admirers.”)

The first episode of the podcast, “Homosexual Necrophiliac Duck,” dropped Wednesday. (Topics also covered in a little over a half-hour: karaoke sung with and without drinking water; the financial upside of Kurt Cobain’s suicide; “wascally wabbit wrapping”; Dr. Alias the hair man; the mind of an attentive waiter; and the combing-through of hair data from Disney World.)

“What is there to say about homosexual necrophilia in the mallard duck?” Abrahams asks. “Before the year 1995 there wasn’t much.”

But that’s when Dutch researcher Kees Moeliker spotted the phenomenon in the mallard anas platyrhynchos from his office in the Natuurmuseum Rotterdam and undertook the most exhaustive look at the topic the world has ever seen.

“This is an unusual scientific study,” Abrahams says with some understatement. But in his world, chief among the peculiarities is that the study is written in plain, understandable language, which he reads in a respectful tone, largely playing straight man to some seriously bent scholarship.

For the rest, you’ll have to listen, download or subscribe here or here – CBS is distributing the Improbable Research podcast on the new CBS Play.it website as well as on iTunes.