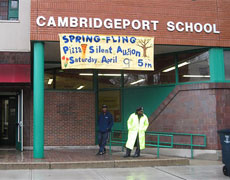 A measles outbreak that began in California has raised concern about a growing number of parents who are refusing to have their children vaccinated against childhood diseases, but Cambridge public schools can point to high vaccination rates. School health officials estimate that 98 percent of students were immunized as of November.

That statistic, however, is not the whole story. The rate of children who are fully vaccinated, with all required shots, can vary greatly from school to school, not only in Cambridge but throughout the state. For example, in October 2013, only 76 percent of kindergarten students had all required immunizations at Graham & Parks School, 77 percent at Haggerty and 86 percent at Prospect Hill Academy Charter School, while the rate at other Cambridge public elementary schools was 90 percent or higher, according to a state report published last month.

Among kindergarteners at private schools, 75 percent of kindergarteners at Shady Hill, 77 percent at Cambridge Montessori School and 84 percent at Cambridge Friends School were fully vaccinated. The state report didn’t disclose rates at three other private schools in Cambridge – Fayerweather Street, Henry Buckner and St. Peter’s –  because kindergarten classes were smaller than 30 students, too small to guarantee that individuals wouldn’t be identified by the statistics.

In recent years, the number of required vaccinations in Massachusetts has grown. For kindergarten this school year, the list includes four to five doses against diphtheria, tetanus and whooping cough, three hepatitis B shots, four shots against measles, mumps and German measles, two shots against chickenpox, and three or four doses against polio.

The risk from partial vaccination is that children will have lower protection against the disease than if they get the full series of immunizations, experts say. For example, the diphtheria-tetanus-pertussis vaccine is only 80 percent to 85 percent effective against pertussis after three shots,  according to the Immunization Action Coalition, a nonprofit that works with the U.S. Centers for Disease Control and Prevention. Pertussis, or whooping cough, can be deadly to infants if they are exposed by contact with an infected older child before the infant can be immunized.

Cambridge school health officials said they didn’t know why the full-vaccination rates varied among public schools. In any case, they said, most kids have satisfied the full requirements a few months into the school year.

“The Cambridge Public Schools has a diverse student body, including students from foreign countries where school vaccination laws differ from those in the U.S,” Cambridge Public Health Department spokeswoman Susan Feinberg and Barbara Meade, a nurse-practitioner and clinical manager for school health services, said in an email. “It is a common scenario for new Cambridge students from foreign countries to arrive in the U.S. in August or early September and then for these students to begin the process of  ‘catching up’ on vaccinations if they don’t have a record of appropriate immunizations.”

That can take a while, especially if the missing doses must be spread out four weeks apart, Meade said.

Catching up, slowing down

Shady Hill school nurse Patty Battle-Mutter said students “from out of state” often must catch up on required Massachusetts vaccinations. “Those figures [from 2013] are not accurate now,” she said. The school nurse at Cambridge Montessori School didn’t return a phone call.

Catch-up may explain the majority of less-than-fully vaccinated kids, but some Cambridge parents have balked at following the schedule, or perhaps vaccinating at all against some diseases. Some fear it will hurt infants and toddlers to subject them to multiple vaccines; others question the science behind the requirements or dispute the danger of childhood diseases.

Dr. Lisa Dobberteen, medical director of school health services and a pediatrician at Cambridge Family Health, said that after a California pediatrician, Dr. Robert Sears, published a book in 2007 suggesting delaying some vaccinations and supporting parents’ right to choose, she started hearing objections to the requirements from some parents. “The Vaccine Book: Making the Right Decision for Your Child” became popular and Sears now maintains a website, AskDrSears.com, as well.

Sears has replied to critics from the medical and public health community saying that he supports vaccination and that he suggested alternate schedules to keep parents from opting out of immunizations completely.

Reputable research overwhelmingly supports the safety and efficacy of the current schedule; most doctors say partially vaccinated children are at risk. Public health officials add that if not enough children get properly vaccinated, there won’t be “herd immunity” – an adequate level of immune children and adults – to protect the population as a whole against outbreaks of vaccine-preventable diseases such as measles.

“Things changed when the Bob Sears book came out,” Dobberteen said. Now, she said, when parents don’t want to follow the schedule, “I discourage that” and urge them to adhere to the requirements “so they don’t put their child at risk.” If they still insist on delay, “I will reluctantly work out an alternate schedule as long as their goal is to fully vaccinate,” she said.

“If a family [of a new patient] tells me they are not planning to vaccinate I tell them I’m not the right pediatrician for them and they should find another doctor,” Dobberteen said.

Some Massachusetts doctors may be more receptive to reluctant parents. Sears lists Newburyport physician Dr. Mark Su on a lineup of “vaccine-friendly doctors” who might be supportive of parents who want to delay or decline vaccination. Su’s website says: “We are open-minded and thoughtful about matters such as … alternative vaccine scheduling.” Su didn’t return a call to his office.

The state requires that children have all vaccinations before entering kindergarten, but school districts may enforce this as they wish. In Cambridge, school health officials allow unvaccinated or partially vaccinated kids to go to class as long as they have an appointment to start catching up, Meade said. If there is a disease outbreak among students, unvaccinated children would be told to stay home, she said; there hasn’t been an outbreak for at least the past five years, Meade’s time working in Cambridge schools, she said.

A small number of children can’t be vaccinated for medical reasons; they are exempt from the requirements with a doctor’s certification. Parents can also have their child exempted for religious reasons if they write a letter stating that they have a “sincere religious belief” that prevents vaccination; no supporting documents are required.

Among Cambridge public schools, the highest rate of medical and religious exemptions was 5.3 percent at the Tobin School, according to the state report for the 2013-14 school year. The school has a Montessori program, and the private Cambridge Montessori School reported a 3.2 percent exemption rate, highest among the private schools with kindergarten classes of 30 or more children.

Descriptions of the Montessori program don’t mention any policies toward vaccination, and Meade and Feinberg said school employees don’t know why the Tobin had more exemptions than others in Cambridge. As of last month only 1.3 percent of Tobin kindergarteners had exemptions, they said. Among the 6,578 children in the entire school system, 70 had exemptions, the vast majority of them religious. Neither the state nor the city will disclose the separate rates for medical and religious exemptions.

Cambridge school nurses report the number of fully vaccinated  kindergarteners and seventh-graders, as well as exemptions, to the state every year in October, school by school. These reports also go to Meade’s office, but the office doesn’t keep any records from previous years, so it’s impossible to find out from the school system whether vaccination rates and exemptions here have been changing. State officials released figures for individual schools for the first time last month, only for 2013-14; immunization program director Pejman Talebian said it would be too labor-intensive for the state to prepare similar school-by-school breakdowns of previous years’ records. 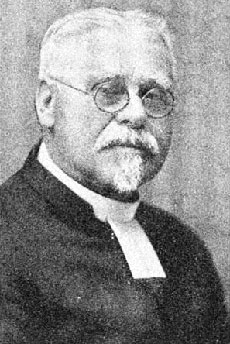 Cambridge’s original vaccine refuser was Henning Jacobson, whose 1902 case wound up at the Supreme Court. (Photo: Evangelical Church in America)

Statewide summaries for kindergarten are available, though. Figures from as long ago as 1975, obtained from the state Department of Public Health, show that full-vaccination rates were above 97 percent starting in the 1980s, when there were fewer requirements. They have slowly declined, often dipping when new shots were added to the list. In 2013-14 the number of fully vaccinated kindergarteners was 90.4 percent. (State health officials warn that their “data are limited in a number of ways,” including lag time and discrepancies that may result from schools self-reporting.)

The percentage of exemptions has risen steadily since 1984-85, when the state started keeping track. It was only 0.17 percent then; in 2013-14, exemptions reached 1.48 percent – still a low figure compared with other states.

Despite the trend, Massachusetts remains a leader in the public health movement to vaccinate children, adolescents and adults. That’s fitting because the state, and Cambridge, started the ball rolling. In 1902, a Cambridge resident, Henning Jacobson, refused to be vaccinated during a smallpox outbreak, arguing that forcing him to be immunized violated his liberty and his right to care for his health as he saw fit. Jacobson said he had been harmed by another vaccine as a child, and his son and others had been hurt by vaccines.

Cambridge fined him $5, which he refused to pay. The case wound up at the Supreme Court, which upheld the state’s vaccination law and ruled that the government could curtail Jacobson’s private liberty for the public good.