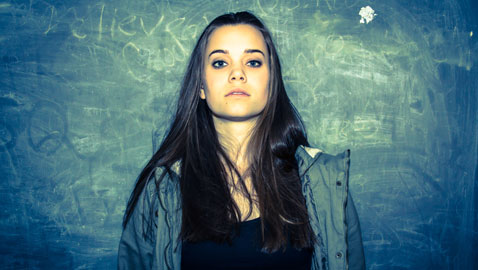 The Middle East’s Corner doesn’t always get bands who play Sundance or share stages with The Black Keys, Grace Potter & The Nocturnals, Gin Blossoms, Gov’t Mule and Robert Plant, but there’s a good reason Jocelyn Arndt is the exception: She’s a local. In fact, for Thursday’s show, she’ll just have to travel a single T stop from her room at Harvard.

Arndt, a Fort Plain, N.Y., singer-songwriter, and her brother and fellow musician, Chris, both attend Harvard, where she’s pre-med. (It’s a rare, but not unheard-of combination. Rivers Cuomo of Weezer, Tom Morello of Rage Against the Machine and David Wax of David Wax Museum all preceded Arndt as Harvard students who know their way around a recording contract.)

Despite her studies, and certainly because she has the energy of a 20-year-old, the duo have been tireless in their touring, performing and courting of the media – releasing their “Strangers in Fairyland” EP on Oct. 27 and a slew of songs and videos since, including some slick, powerful examples of their melding of blues, indie-rock and jazz: “Cinderella” went up on Joonbug just before the EP release, “Nevermind” on Nov. 24 on Fanlala, her “Lullaby” went live Jan. 14 on Popdust and her “Here to Stay” went live Feb. 13 on Diffuser.

Jocelyn Arndt plays an 18-plus show at 9:30 p.m. Thursday with Over the Bridge and Annie in the Water at The Middle East Corner, 480 Massachusetts Ave., Central Square. Tickets are $5, but fans can find a special deal here.