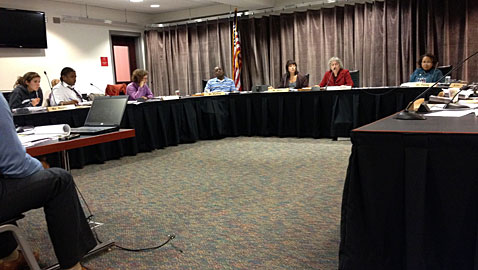 The current School Committee will choose the next superintendent, according to a draft schedule its members approved Tuesday. With Cambridge’s two-year terms, all six committee positions – along with the mayor, who leads the committee – will be up for reelection this November, but the plan has the new superintendent chosen by October.

Superintendent Jeffrey Young will be leaving the position at the end of June 2016.

Committee member Patty Nolan said “the timing could be either a net positive for us, or a concern,” noting the tradeoff between having access to the best pool of candidates and potentially being “harmed by asking someone to apply for a job a full year before appointment.”

Acknowledging that concern, Mayor David Maher said that he and staff member Alanna Mallon had looked not only at past Cambridge searches, but at recent searches in other communities, including Lexington, Newton and Somerville. “We found that in those areas, decisions were done between December and January. This schedule is only six to seven weeks earlier. I’m hoping that puts us at an advantage.”

“This timeline allows for flexibility [in] working with the current superintendent and the current school members” to find candidates, Maher said.

The search starts with advertising for a search firm to manage the process, a step proposed for the end of April. The search firm will collect and initially sort candidates, but will also “take the lead on community input,” Maher said. The firm will work with an interview subcommittee that will include “broader community representatives.” Nolan suggested creating a structure for collecting community input right away.

But the schools’ executive director of human resources, Barbara Allen, explained that the request for proposals seeking bids from search firms can be crafted in such a way that the committee can have significant control over the qualities they desire in the firm, and can include avenues for the committee to conduct interviews with firm candidates.

Young, 62, was hired in April 2009 in votes that went from 5-2 to 6-0, with then mayor Denise Simmons abstaining – a reflection of a contentious search process that had some critical of bringing in Young from Newton instead of promoting Carolyn Turk, who was interim superintendent and is now deputy superintendent.