Teachers renew efforts against PARCC test as bar to ‘real work’; student has other way to reduce stress 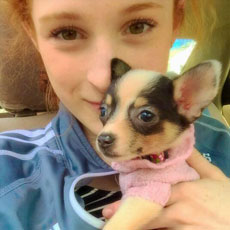 Teachers renew efforts against PARCC test as bar to ‘real work’; student has other way to reduce stress

Continuing efforts from the recent budget process, teachers came to the School Committee meeting Tuesday – National Teachers’ Day – to speak up, present petitions and ask for support in changing the climate in the classrooms that takes “us away from the real work of teaching and learning.”

Union head Terry Gist presented an educators’ petition calling their situation “demoralizing” and asking for a rethinking of the role of testing, data collection and “an overload of change initiatives.” After the meeting, one teacher estimated that they have collected between 300 to 500 signatures to date. “On behalf of our members and in support of our students,” Gist told the committee to applause from teachers in the room, “[we] ask that you join us as we take a stand for our students and the education that they deserve.”

Gist and teachers also called on the committee to join a resolution calling for a moratorium on “high-stakes standardized tests.” The resolution, which the educators conveniently wrote as a resolution from the committee – so members need only add their signatures – was presented with a fact sheet on a Massachusetts legislative proposal putting a three-year moratorium on the implementation of the PARCC test, a potential replacement for MCAS exams, and removes the “high-stakes” nature of the current standardized tests by eliminating use of the scores in assessing schools, evaluating teachers and determining high school graduation. The bill is sponsored by state Rep. Marjorie Decker, who served seven terms on Cambridge’s City Council, and is co-sponsored by a dozen state senators and 41 representatives.

The Cambridge Education Association’s executive board voted unanimously to thank Decker for her “courage and vision” in filing the act, Gist said. The board includes a representative from each elementary school, each Cambridge Rindge & Latin School learning community and each non-teacher bargaining unit. 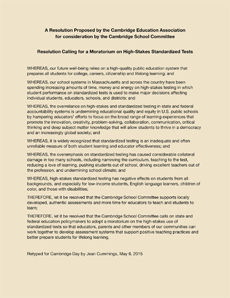 Teachers asked the School Committee to join a resolution calling for a moratorium on “high-stakes standardized tests.” Click to see the document.

Gist was followed by three Graham & Parks School teachers offering reasons they are asking the committee to “help us stop the PARCC test.” (The state board of education is slated to make a statewide decision this fall whether to switch or stay with the current test after a two-year trial during which all communities used the new test for at least one year.)

Teachers Karen Engels and Rose Levine cited as reasons to reject the test “inappropriate levels of anxiety” for young students created by timed tests (the current ones are not timed); “significant test creep” arising from the multiple testing periods each year; keyboarding skills required beginning at age 8 that will “assess typing skills rather than thinking skills”; the high cost of providing the necessary technology; and the fact that the state’s decision-maker on the test, Education Commissioner Mitchell Chester, is on the board of the PARCC Consortium. Engels noted that district-level assessments “takes over” September, January and June, and that MCAS, given only once a year per topic, already “gobbles up” March and May.

“It’s trying to test critical thinking through a standardized test. I think there’s something inherently wrong with that,” veteran teacher Kathy Greeley said. She shared a specific example of a third-grade PARCC item that she clearly felt was “developmentally inappropriate.” in which 8-year-old children read a story and poem, compose and type a two-part set of questions for each text, then write an essay comparing the two texts and addressing four questions, including in one part imagining how the story’s protagonist’s experience might change “if she became friends with the author of the poem.”

“We hope you join our effort to stop the PARCC in Massachusetts and stand up for kids,” Greeley said, to applause from the teachers in the room. The teachers included an invitation to the committee to “express your concern and support” at a Board of Education hearing at Bunker Hill Community College on May 18.

The teachers were allowed to speak even though they were not addressing an agenda item, something technically not allowed in the committee rules but usually granted. The committee has been known to suspend rules to allow committee discussion of a topic raised in public comment or by a member, but no members moved to do so and the committee remained silent Tuesday night on the concerns by the educators.

Several Massachusetts school boards and superintendents have weighed in on a slowdown of high-stakes testing, including those in Belchertown, Southwick, Wrentham and a coalition of educators from 10 districts in Western Massachusetts.

With four scheduled regular committee meetings remaining before the school year ends, the meeting agenda was light: no presentations on the superintendent’s agenda, five motions from committee members and a handful of contract and policy revision approvals.

Member Patty Nolan made a motion to have a joint meeting between the committee, administration and Amigos School staff and school council to “develop a short-term and long-term plan … to ensure the growth and success of the school.” Amigos council member Juan Iozada supported the motion during public comment, saying three years after the implementation of the Innovation Agenda and with a new, first-time principal coming aboard, it “might be an excellent opportunity to increase collaboration with the district, analyze where we are and ensure the future success of the school.”

Members went back and forth to an unusual degree on the extent to which a measure-taking of Amigos should be part of an upcoming roundtable on upper schools scheduled for May 26 or a separate discussion before or after that roundtable, or whether a separate discussion of one school is even a good idea. The group ultimately reached consensus that the many unique aspects of the bilingual Amigos, the sole remaining K-8 in the district – the role Controlled Choice socioeconomic balance plays in maintaining bilingual enrollment, how to combat attrition in a bilingual school, how the Amigos middle school fits into the Innovation Agenda, the state of the physical building – merited a separate meeting and, at Kathleen Kelly’s strong urging, one held before the upper school roundtable.

The committee also unanimously passed a motion by Mayor David Maher to recommend that the superintendent explore the feasibility of a proposal by CRLS senior Sophia Gottlieb to start a therapy dog program in the high school’s special education department. During public comment, Gottlieb read an eloquent statement outlining the program that she would oversee as a school project, giving some research background on the effectiveness of pets in “lessening anxiety” and referring to other successful instances of dog therapy in school settings. The next step, Superintendent Jeffrey Young said, will include consultation with the city’s public health department.

The committee also passed unanimously a recommendation to give $100 and one comp day to each teacher having to pack up a classroom in preparation for their school moving to a new building over the summer, which will include the King and King Open Schools and the Putnam Avenue and Cambridge Street Upper Schools. This is a continuation of an agreement struck with other teachers at the beginning of the Innovation Agenda and reflects the fact that most teachers prefer to pack their own classrooms, according to Chief Operating Officer Jim Maloney. After asked about it by Nolan, Maloney said that crates are delivered to teachers after MCAS the week of May 18, and that teachers pack during the rest of the year, but not during class time. Nolan suggested that Maloney may want to “remind” teachers that they should not pack up the entire classroom before the end of school. Member Fred Fantini took umbrage, saying he was “confident that our teachers teach to the very last day of school.”

The committee passed without deliberation a superintendent recommendation for non-participation in the statewide “school choice” program, which allows students to attend public schools in other districts with tuition paid by the home district. The program allows districts to choose not to accept out-of-district students due to space constraints. The superintendent made the recommendation based on the need to support Cambridge’s own Controlled Choice program and to control class size. Maloney said Cambridge has not participated in this program in his memory. Last year 54 percent of 322 districts participated. The program is very lightly used in Greater Boston.

The committee also approved the request for proposal for a firm to lead the search for a new superintendent. The committee approved some edits they had discussed at last week’s meeting and agreed to formally approve the new draft with one additional tweak on language evaluating interviews. The final draft is due to be advertised Thursday, when it will also be available here. Following up on concerns voiced by parent Pia Cisternino during public comment that the schedule did not allow for sufficient community involvement, Human Resources Director Barbara Allen assured the committee that she was “confident” that there will be significant community involvement, saying that the “front and tail ends” of the process, where community input is most important, happen during the school year. Maher added that, although the search timeframe is somewhat earlier than many other communities, a six-month search was standard in communities his staff researched.

Also passed unanimously were recommendations for contracts for $26,700, $250,000 and $320,000 in technology hardware and software, which Chief Information Officer Steve Smith said were the final pieces of a plan putting the entire school system on the same technical footing, as outlined in the department’s long-range planning document presented last year; revisions to policies related to bullying and wellness; $34,000 for a residential out-of-district placement; $90,000 for professional referrals related to student plans through the Office of Student Services; and acceptance of a small gift to the Morse School.